In the middle of the 20th century, when I was growing up, libraries seemed to organise their loan system extremely efficiently, even though there were no computers.

To understand how they did this, first requires descriptions of readers' 'tickets' and the inside front covers of the library books.

In order to join the local public library, we had to show some form of identification to confirm that we were in a household which was contributing to the library by paying rates - the precursor of council tax. We were then issued with library tickets and became 'members of' or 'readers at' the library.

The tickets were made of folded card, stuck together at the bottom to form corner pockets. They showed the reader's name and address; whether the ticket was for fiction, non-fiction or children's books; and the name of the library.

My recollection is that every adult member had two tickets for fiction books and two for non-fiction (factual) books, but this may have varied from one council to another. My family was in Edgware, north London, then Middlesex. The two types of ticket were of different colours and children's tickets were of yet another colour. 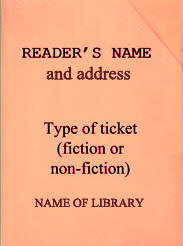 My reconstruction to show the style of a a readers public library ticket - formed of folded card and stuck at the bottom to form a pocket.

(My local county library checked its stock but no longer had an actual example to photograph.)

Library books were instantly recognisable from their inside front covers.

Glued to the bottom left of the inside cover was a pocket very similar in style to a reader's ticket, but giving details about the book to which it was attached. Inside the pocket was a detachable card giving the same details. On the right was a glued sheet giving details of the library and showing the 'due back by' date stamps from previous loans.

My reconstruction to show the features of the inside front cover of a public library book before computerisation.

(My local county library checked its stock but no longer had an actual example to photograph.)

There were card indexes for books, by author and by general topic. In practice, though, choosing a library book was normally a matter of just browsing the shelves. Books could be reserved at a cost which included the cost of postage to let us know that our reserved book was in.

How librarians kept track of borrowing and lending

Once we had found a book we wanted, we took it to the librarian at the desk. She - yes, it always seemed to be a 'she' in those days - first took our readers ticket and then opened the front cover of the book. She took out the loose card in the fixed pocket and slotted it into the readers card which she kept in a filing tray on her desk. Then she stamped the date sheet of the book to show when it was due back. This was normally a fortnight ahead. We then took our borrowed book away with us and she kept our library ticket with details of our borrowed book in its pocket.

There were dividers in the librarian's filing tray separating out the dates of borrowing.

A tray or drawer of library cards on the librarian's desk

In the 1940s, a fine of 1 penny per day was imposed by public libraries for 'late returns' of books.

When the fortnight ahead came round, if the book had not been returned, some sort of note was slotted into the readers card to notify the librarian when the customer came in that a fine was due. A similar note notified that a reserved book was in. I have a vague recollection that reminders, fine notifications and reservation notifications were also sent out by post, but I am not certain.

To return a book, the procedure was reversed. The librarian noted the due date from the stamp date inside the front cover and so located the readers card in the drawer of the filing cabinet on her desk. She removed information about the book, slotted it back into the pocket of the book and gave back the readers ticket. With this, we were able to borrow another book.