How we used to record from television

In the 1970s, whenever people in ordinary homes wanted to record a television programme, it had to be on video tape. There were two systems, each requiring its own recorder/player. So once anyone had decided on a system, they were stuck with it. 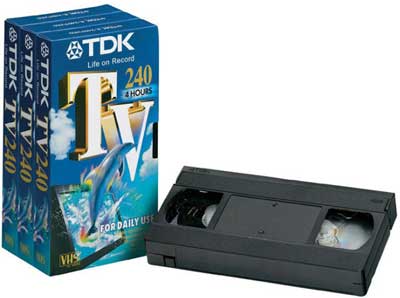 A VHS video tape which would run for 4 hours. Its make is TDK but there was no shortage of other manufacturers, eg JVC, BASF and Scotch.

The two systems were Betamax and VHS.

Betamax was reckoned to give a superior recording, so that was the system that my husband and I went with. However we lived to regret it because VHS soon cornered the market. Whether this was because the system was cheaper or its marketing was better, I can't say. Fortunately VHS did improve over the years.

To record or to watch live?

We were thrilled to be able to record and replay television programmes and did it a lot. In other families we knew couldn't be bothered or couldn't cope with the technology, so did as they had always done, i.e. clock-watched until the live start of whatever programme that they wanted. Neither was it unusual for families just to keep the television on all the time, which is something I haven't seen for years. 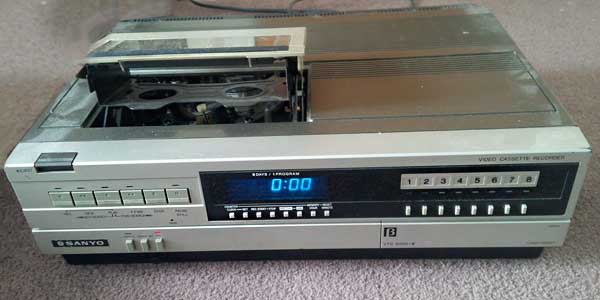 My family quickly got to grips with the technology of video taping programmes. So the advantages far outweighed the disadvantages. We took them in our stride at the time because there was nothing better. In fact, I don't think we noticed any disadvantages, although, by today's standards, video tapes had significant ones:

The video tapes tended to break and wind themselves round the spools of the machine. The unravelling had to be done by hand and was time-consuming and awkward. It was also expensive because it meant that the tape could no longer be used and a new one had to be bought. It also of course meant that the recording was lost with no means of recovering it.

Once viewed, video tapes could be recorded over - normally quite a number of times, although that break was inevitable at some stage.

Realistically, the maximum reliable recording time on a reliable VHS tape was only three hours. These tapes were marked as L180, E180 or just 180 for 180 minutes. Longer tapes did exist, but their tape was thinner and broke more easily.

Shorter thicker tapes, did exist, but they were not really practical for home recording as only the number of programmes that could be recorded at a time was limited by the duration of the programme concerned. So the short tapes tended to be used by organisations for short recordings such as promotional videos.

All the lengths were packed into the same sized cassette. So to tell which one was which one either looked at the label on the front of the cassette or on its box, or at the amount of tape which was visible through the cassette window. The shorter the tape meant the lower its price.

Setting the video recorder to record

I liked to set the video recorder up for a whole week's programmes at a time.

However, the short lengths of the video tapes meant that I had to make sure that I had enough tapes and that I would remember to take a full tape out of the recorder before the next programme was due to start.

So I labelled each of the week's tapes with the date and time for a recording session and left the tapes in date order in a pile somewhere obvious. Then I made it my business to check every morning whether a new tape was due to go into the machine. It was a palaver, but I took it in my stride because I knew nothing else, and nothing better was available.

The awkwardness of setting a video recorder

To be fair, it was understandable that so many people didn't bother setting the early video recorders Separate inputs were needed for the day, the start time, the end time or duration and the channel. Mistakes were all too easy to make, resulting in broken tapes and spoilt recordings.

It did not seem long before programme schedules were published with a string of numbers beside each programme so that only those numbers had to be inputted into the video recorder. However, that meant jettisoning the old video recorder and buying a new one which was something that few families could justify. Even with the number system, though, it was all too easy to input a wrong digit somewhere in the string, particularly in view of the awkwardness of access to the input buttons and the display window. If my memory serves me correctly, there were no remote controllers for the early video recorders.