What it was like to listen to the radio (wireless), 1940s UK

When I was a child in England in the Second World War, there was one radio in the house. (Televisions were still many years away.)

The radio was called the 'wireless'. I don't know why the name changed over the years to 'radio', but I do know that some twenty or so years later, anyone who still used the term 'wireless' was considered very out-of-date.

The wireless in our house was a particularly attractive one. It was in a large polished wooden box which could lay claim to being a piece of furniture in its own right because it was so elegantly contoured and veneered in cross-ways veneers. I am very fortunate indeed to have a photograph of it - see below.

Our wireless had a speaker covered in some sort of roughish fabric, a dial, two large knobs and two smaller ones. The left hand large knob clicked the wireless on and off and further twisting adjusted the volume; the right hand knob searched the stations; the right hand smaller knob adjusted the tone (bass or treble); and the left smaller knob selected long, medium of short wave. 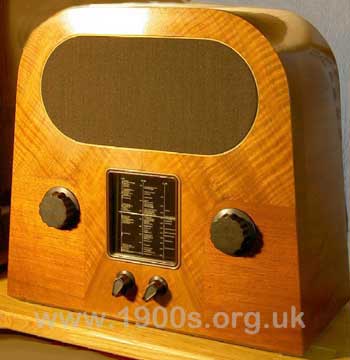 The wireless that I grew up with which I know to be a Murphy A46* because I still have the receipt of purchase. 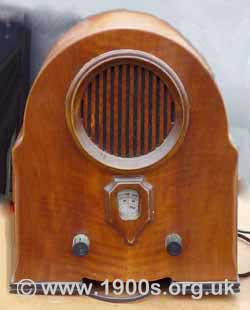 A basic radio with two knobs: one for on/off and volume and the other for tuning.

The range of types of radios / wirelesses

What always struck me was that every family seemed to have a different-looking wireless, housed in its own individually shaped box. Even the woods were different.

Although all fitted the same description of a polished wooden box with either two, three or four knobs, a dial and a fabric covered speaker, to me, as a young child, they all looked very different. Clearly domestic radios, unlike home telephones which were all identical to one another, must have had a number of manufacturers, each producing their own range of styles.

It turned out that all the wirelesses that I knew had been bought in the relatively affluent 1930s, before the Second World War. That was to change - see below.

Dials on radios - stations and 'sides'

As a child in the 1940s I was always puzzled at why the dials of nearly all the radios seemed so wide-ranging. Yet we could only listen to two stations.

I since learnt that in the 1930s before the war, British people frequently listened to European radio stations. I can't say whether the programmes were in English or whether only the music was particular popular.

Early in the war, however, with the Nazi insurgence, the Nazis closed most of these European stations, making the German station, Radio Hamburg, the only European one that could be heard in Britain. The Nazis used this and more to broadcast propaganda to demoralise the British people.

To prevent people from listening to Nazi propaganda, the British Government closed all cinemas and radio stations bar one - the Home Service. It seemed designed to inform about the progress of the war.

People became so demoralised with the lack of entertainment, that the cinemas were opened again and another radio station was allowed to broadcast - the Light Programme. It seemed designed for light entertainment.

During the war, a radio station was widely known as a 'side'. People would say things like, "Which side are you going to listen to this evening?" Since only two stations were broadcast, the term was quite appropriate. Both were broadcast by the BBC, ie the British Broadcasting Corporation.

I don't remember the term 'channel' ever being used for the radio. It came later with television.

Just after the war, a new station was broadcast by the BBC, known appropriately as The Third Programme and dedicated to what my mother called 'highbrow music'. It may have been popular but we never listened to it.

Although radios were manufactured for the home market during the war, they were very basic indeed. They were made to government specifications by several manufacturers. A feature was that they could not receive long wave, which meant that we in England could not listen to or be influenced by the propaganda transmitted from Germany.

Although there were no new types of radio for the home market during the Second World War, manufacturers seem to have thought it worthwhile to keep their names in the public eye. Hence the advert in the thumbnail below left. The advert is somewhat wistful in the way that it speaks of 'better days'. In order to read the small print, tap/click for an enlarged, legible version. 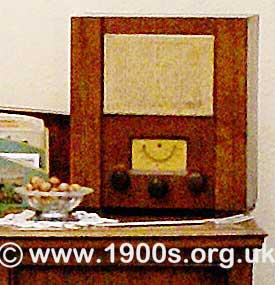 The radio1940s radio manufactured during the Second World War - next to a bowl of nuts for scale. Note the three knobs for on/off, volume and tuning. Photographed in Milestones Museum, Basingstoke. 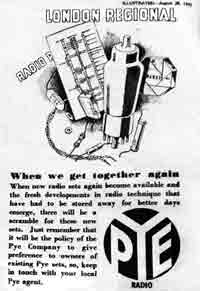 Advert in a 1943 magazine, telling readers that Pye radios will be ready when 'better days' come.

Even as the 1940s merged into the 1950s, radios must have been rather expensive in real terms. I never knew any families who had more than the one. The better-off families had something called 'an extension', ie a run of cable from their one radio to a speaker in another room. This meant that the radio could be listened to in either room. 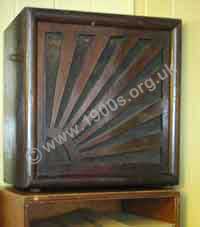 An extension speaker. Photographed at a Watercress Line event.

I asked my mother if we could have an extension too. Looking back, I don't think I was particularly concerned about being able to listen in a second room. Rather, it was my first awareness of the existence of a 'status symbol'. Anyway, my mother said 'no' and that we couldn't afford it - but that was her response to most requests. During and immediately after the war, money must have been tight.

I particularly remember Music While You Work which broadcast very lively music with a rapid beat, designed to encourage the women working in the factories to speed up their production.

Being a child, my favourite programme was the daily Children's Hour, which my mother and I listened to over tea.

My mother and grandmother - and my father when he was home from the army - listened to the Light Programme during the evenings while I was supposed to be asleep. The News, of course, on the Home Service, was not to be missed, because it reported on the war, but I was too young for it to mean much to me.

More programmes of interest were introduced after the war. My mother seldom missed Woman's Hour. It was broadcast just after her lunch when, presumably, women were deemed to be allowed a sit-down between the morning's and afternoon's housework.

My parents liked In Town Tonight which was broadcast on Saturday evenings and presented interviews with well-known people who happened to be in London at the time. I was not particularly interested, but in the late 1940s, as in previous years, it was accepted practice for all family members to be together in one room. So I could not help but hear what my parents were listening to, especially in winter when there was only heating in one room, with its single coal fire.

As I grew older, after the war, I liked the programmes in which people phoned in requests for boyfriends, husbands and relatives still serving in the forces overseas. The requests were invariably for pop music which appealed to me at that time. In particular, Europe was transmitting again, and Radio Luxemburg provided non-stop pop music requests. For some reason which I cannot now understand, I seemed perfectly able to listen to the music while doing my school homework to an acceptable standard.

Radios after the Second World War

After the Second World War, wirelesses (radios) gradually became available again, with many brand manufacturers. The more expensive ones limited their sales to selected dealers, but many other brands were more widespread, and some others were available to all shops. Top brands included Pye, Bush, Ekco & Murphy, while Philips, Ferranti, Ferguson & Ultra were more widely available.