How we used to listen to recorded music, mid-20th Century UK

By the mid 1950s we could buy and play recorded music on portable machines known as record players. 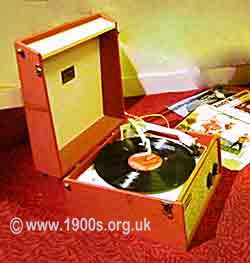 In my mid teens, which was in the 1950s, I managed to buy myself a record player. It was funded from a Saturday job working in the local department store in Edgware, Stanley J Lee.

It was cheap by the standards of the day and was certainly mass-produced.

I was very proud of my record player. It was housed in a large red and cream case with a latched lid and handle, clearly designed to appeal to teenagers. I was pleased to find an identical one in Basingstoke Town Museum - see the photo - and have seen others identical in museums since.

In spite of being advertised as portable, it was very heavy and I certainly never moved it far.

Record players played from 'gramophone records' or just 'records' which were flat discs about 25 cm in diameter. One of these records was placed on the turntable of the record player, which rotated while a needle was allowed to glide over grooves in the record. This produced a sound which was amplified.

These early records - ie early from the point of view of being available to people who were not particularly well-off - were made of black shellac resin. They were damaged through repeated use, particularly if the needle was not changed frequently and they scratched easily. If the needle jumped, which was not uncommon, the turntable swung it into the centre, making a bad scratch. When such a scratched record was played, the needle could bounce back every time it reached the scratch, making the same phrase repeat continuously until someone lifted the needle up and over the scratch. At that time, people who kept repeated themselves were often described as sounding, "Like a broken record".

On one awful occasion my uncle and aunt brought their record player and some records to our home so that they and my parents could do ballroom dancing in our front room. My father hadn't any idea how to do ballroom dancing but shuffled game-fully around. In so doing, he trod on the pile of records which had been left on the floor by the record player. Every one cracked or broke into several pieces.

I saw many a scratched and shattered record. Nevertheless I did save up to buy a few which I played repeatedly because they were all I had.

When improvements came along, these old records became known as '78s' because they played at 78 revolutions of the turntable per minute.

You could 'play' old records by running your finger nail along a groove. Of course the resulting sound was very feint and the record got damaged in the process, but it was fun for a child to do when no adult was looking. 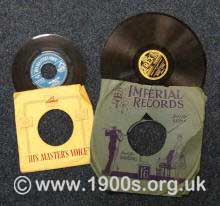 Tap/click for a larger image to see details of the labels and sleeves and the closer ridges on the 45 record. 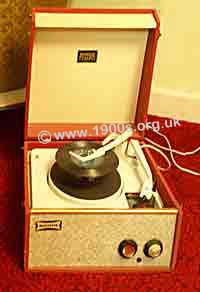 Record player with an extended play facility. In practice there would have been several records on top of one another, ready to drop down and play.

Later records were an improvement over the 78s. They were were smaller, made of acrylic which was non-brittle and played more slowly at 45 revolutions per minute. They were known by several names: 45s, vinyls and 'extended play'. The extended play feature was because, being less brittle, they could be dropped onto the turntable, one at a time from a small pile each time a record finished. This enabled the music to last for some considerable time without anyone having to reset anything.

There was a switch on the 'then-modern' record players to allow playing at either 78 or 45 revolutions per minute. 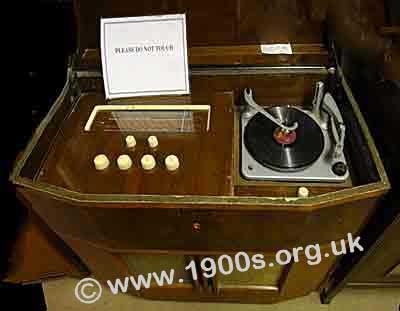 Radiogram with lid open to show the radio and the gramophone.

Record players, known by the older generation as gramophones, had existed in the better-off homes since before the war and can be seen in museums. They tended to be in the better-off households and were normally housed in what were called radiograms, bulky items of furniture comprising a radio, a gramophone, speaker and storage shelves, all in one large polished dark-wood cabinet. I never knew any families that had one. 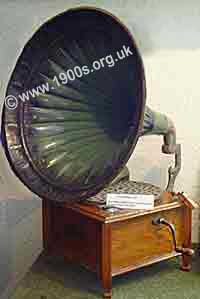 1920s or 1930s wind up gramophone with horn. Photographed in Nidderdale Museum.

While I was growing up in the 1940s there was an old gramophone at home. We had to wind it up to make the turntable turn. The sound came out of a horn.