While I was a child in the wartime Britain of the 1940s and then a teenager in the 1950s, most people had a book on the go - invariably borrowed from one of several types of library.

Why libraries were so popular, even essential

It was important for people to be able to borrow books from libraries. In wartime and the years of austerity afterwards, there were few books at home because at the start of the war, we children were asked to bring to school any 'unwanted' books from home for pulping into newsprint. (Badges were awarded to children who donated the most books.) Also there were very few magazines in the shops; and newspapers were restricted to two pages. Such were the dire straits that country was in. Yet people could escape into books, so libraries were the palaces of dreams. 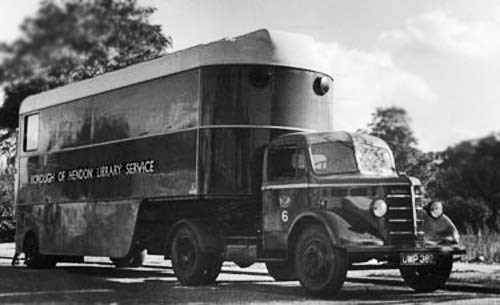 Mobile library, courtesy of Tony Woods. The writing on the side reads 'Borough of Hendon Library Service'

In the late 1940s and probably into the 1950s, there was no public library where I grew up. This may have been because the building had been bombed in the blitz of the Second World War, or because my family lived in the newly-built London suburbia.

Instead, like numous other families, we made do with a mobile library. It was no bigger than a large caravan, so its stock was very limited indeed, although it was changed frequently. It came came round the streets once a week, and stayed in one place for only a short time and only in daylight.

Public libraries did exist in their original purpose-built buildings in the older towns where they had been fortunate enough to escape the German bombs of World War Two. I remember them in Fore Street and Hounsfield Road, Edmonton.

In the late 1950s, my hometown of Edgware got a new purpose-built library on the site of the prefabricated wartime British Restaurant.

Privately run subscription libraries were small, usually associated with a particular shop, and I now wonder why anyone would want to use them because public libraries were so good. I think the answer was that the people who used them felt that they could be confident that the last person who used the book that they had just borrowed was 'a better class of person' who was more likely to live in a clean home. That was certainly the implication from women who my mother stopped to chat with in the street. Not that this made any impression on her.

There was a private subscription library in my home town of Edgware, which was open during normal shop hours. It was called Gainsborough Libraries, but my mother showed no inclination in joining, and when I asked why, said we couldn't afford it - which was her standard answer to most things at that time.

Boots the chemist also had subscription libraries above its shops in large towns. 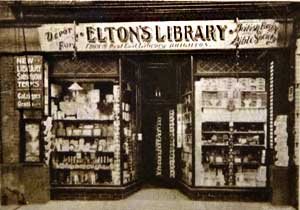 A private library, run as part of a shop. Photographed in the Lightbox, Woking. 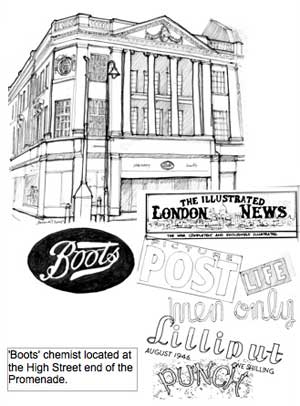 The advert for the Boots subscription library shows some of its magazines, almost certanly for reference only: The Illustrated London News, Picture Post, Life, Men Only (which probably wouldn't be allowed today), Lilliput and Punch. Advert courtesy of Ian Henderson.

Academic libraries, such as the British Library and libraries attached to universities. were out of the reach of ordinary people. Anyway, their stocks were moved to safer rural storing during the war.