Rationing and shortages in the UK after World War Two

When did rationing end in the UK?

Anyone who didn't live through the times of rationing and shortages of the Second World War would tend not to realise that the austerity in Britain continued in an even worse state for years after the war ended. Rationing in Britain did not end completely until 1954, nearly a decade after the end of the war, and the UK was the last country to end rationing.

Why rationing and shortages continued after WW2

There were two main reasons why rationing and shortages continued after WW2.

One was certainly that the USA withdrew its support for Britain when a Labour government was elected in 1945. American money went to restoring Germany, but not Britain. So money to rebuild Britain was in short supply.

The second main reason was British generosity and is explained in the following box.

After the end of the war with the seas safe, more food certainly did come from overseas. Australia and New Zealand were able to ship out large quantities of beef, lamb, butter cheese; and the Irish, who did not take part in the war, were able to supply us with fresh dairy products once hostilities had ended. Most of our beef, both frozen and tinned came in from Argentina. Yet, in an act of exteme generosity, it was decided that we in Britain should go on a further reduced allowance in order to send supplies into Europe. Why? See the next paragraph.

Why Britain diverted much of its imported food to Europe

By the end of the war there were millions of displaced people in Europe from slave camps and concentration camps who were starving to death and who had to be fed and made safe from infection. The problem was gigantic. Holland, Belgium, Germany and Denmark - all occupied by Germany during the war - had been reduced to starvation diets by the war. In Holland people were reduced to eating grass, and even cats and dogs. This I have since been told during visits there.

I can confirm about the displaced people after WW2. When I was teaching in the 1950s a number of my students had United Nations passports because they had no country to call home.

Having diverted imported food to Europe, we in Britain seemed to live on corned beef from Uruguay. The brand was Fray Bentos, which became a household name. There is much more about food rationing elsewhere on this site or use the search box on the home page.

Britain's meat diet even after the end of WW2 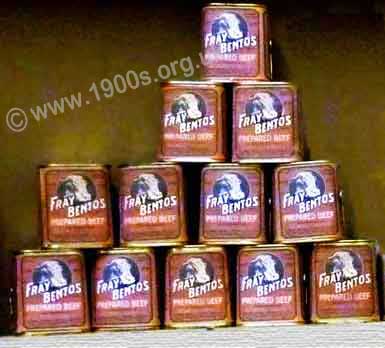 
Right: advert for Spam in Picture Post, 1944.** It was hardly necessary because so little other meat was available.

We no longer had the powdered eggs and spam that we had enjoyed from America.

Britain had borrowed vast sums of money to finance our part in the war, mainly from the USA, and they were seeking re-payment. It took some 50 years to pay off this National Debt - a significantly long time. We were crippled by the war and there was no money for investment afterwards.