How the British coped with clothes rationing in and after WW2

The hardship of clothes rationing in and after WW2

In the shortages of the Second World War, there was no way to buy what might be regarded as 'nice clothes'. Quite apart from the fact that money was so short, clothes were rationed and could only legally be bought from shops on a point system. (Illegally they could be bought on the 'black market' if one knew the right people, and from barrow boys who could trundle their barrows quickly out of site of a policemen, but they are for other pages.)

The points system for new clothers was severe. The clothes were functional and they carried a special mark known as the utility mark, but that too is for another page.

This page is about how people managed for themselves and their families during clothes rationing.

The motto was: Make do and Mend.

The tools were: Hard work, Creativity and Improvisation.

In view of the shortages of nice clothes and the severity of clothes rationing, there was no stigma in giving and receiving outgrown clothes.

I remember some particularly expensive-looking dresses in two sizes which had been bought for a neighbour's two girls before the war, and which served me well as a child for several years. As I grew out of one size, the next size up was ready and waiting.

Families also provided cast-offs, which were in relatively good supply while I was young because they had been bought before the war started, ie before there was rationing. Children born towards the end of the war and in the years of austerity afterwards were less fortunate because outgrown clothes had already received wear from several children.

Although selling rationed goods for money was classed as Black Market for which there could be a prison sentence, swapping was legal. So bartering came into its own in this time of rationing and shortages. People would swap things. Most shops had postcards in their windows saying things like:

Women were normally expert at sewing, knitting and darning just as their mothers had been. This made them ideally placed for 'making do and mending' by modifying and mending old clothes and knitwear to fit someone else.

It became quite normal to 'decorate' tears and holes attractively from parts of other worn-out clothes and to cut down adults' clothes to make clothes for children. 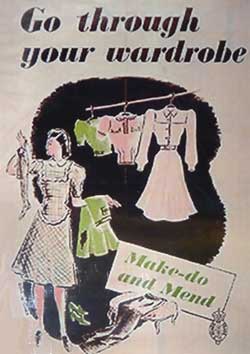 Women made a lot of their family's clothes and were skilled at it. Although fabric was rationed and relatively basic (with the utility mark stamped on the edge), making clothes was cheaper than buying, and the style was one's own choice. It was also normal to make new clothes from worn old ones.

Paper patterns for making clothes were fairly readily available to help with dressmaking, but they were quite expensive in terms of the cost of the finished garments, and women tended to use their ingenuity, where possible, rather than buying a paper pattern.

It always seemed strange to me that these paper patterns always came in dress sizes. There was advice on how to modify them, by putting tucks in them to make them smaller in places or adding newspaper to increase sizes in other place, but there was not a single pattern for a particular style, with different markings on for different sizes. That came much later. 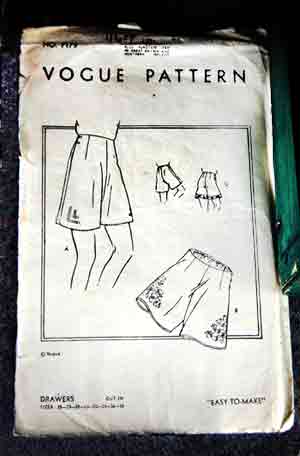 How badly did clothes rationing and shortages hit people?

Clothes rationing and shortages hit everyone. The least badly hit were children who just wore whatever they were dressed in. Sandra Hanson makes a convincing case below for young adults being the hardest hit.

My mother was about 18 when WW2 began. She said that the war shortages were particularly difficult for young adults, because, unlike older people, they hadn't had time to get a good stock of clothing together, and many were living away from home and family support.