Coal rationing in and after 1940s wartime Britain 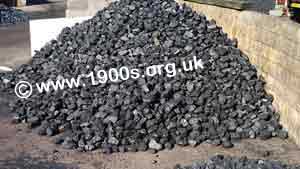 The shortages and austerity of the Second World War caused coal to be rationed, even though Britain was a coal producing country.

The severity of coal rationing in 1940s UK

It is difficult for anyone who was not alive at the time to understand how significant coal rationing was, as almost all domestic heating was from coal fires, hot water was from coal fired boilers or coppers and many people were still cooking on coal fired kitchen ranges. Industry, too, was powered by coal.

The coal ration was set at two and a half tons per household per year, that is fifty hundredweight.

A reaction to coal rationing from a typical elderly lady

There is a whole group of pages on coal purchase and delivery in the early-mid 20th Century on the shops menu.