The copper which supplied hot water in old houses

Why a copper was an essential item in old homes

Although a kettle on a kitchen fire or kitchen range could supply relatively small amounts of hot water, the 'copper' water heater/boiler was the only means of obtaining hot water in significant amounts - for the laundry on Monday washday, for the (occasional) bath, for cleaning the house, etc. It was an important piece of household equipment, but I had never seen one. All I knew from my mother was that it was like a deep cauldron with a lid, built into the corner of the room with a space underneath for the fire. 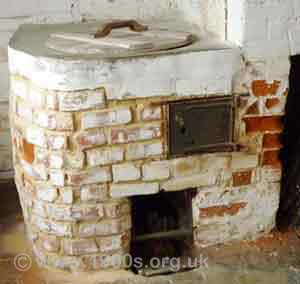 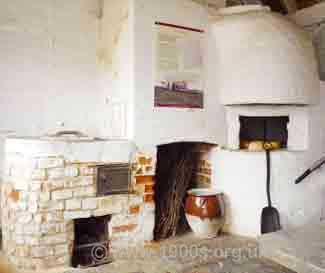 Arrangement whereby the copper, a fireplace and a bread oven all share the same chimney

So began my extensive search for more information.

The search for an original copper and why it wasn't straightforward

The problem with finding out more about coppers turned out to be because they were both built-in and bulky. So although every Victorian and Edwardian house had with one and although numerous such houses are still giving good service today, their coppers have understandably been demolished to make room for more modern appliances.

I found that some 'cauldron' parts and lids did survive in museums but they meant little to me by themselves. The occasional museum even had a reconstruction, but it was not plumbed in.

Finally - a surviving copper in its original condition

It took a long search to find an original plumbed-in copper where I could photograph it. (The National Trust properties with coppers did not allow photographs.) Success was in an outhouse at Jane Austen's house in Chawton - see the above photos. In the better-off houses, coppers, like hers, were in outhouses, although in the working class Victorian-style terraces where my mother lived, the copper was in the scullery.

Seeing an original copper enabled me to make much more sense of the descriptions and the museum exhibits.

An aside - why the name copper

Before going on to explain how coppers worked, let me explain the name.

In wealthier houses, the container for the water really was made of copper which is an excellent conductor of heat, but this was exceptional. The container was generally the cheaper cast-iron, and its size depended on the size of the household which it served. It was rather like a very large deep bucket without a handle. Hence my mother's description likening it to a cauldron.

As the sites of housing areas destroyed by WW2 bombing were cleared, many cast iron copper linings were revealed. Most were broken to some degree but those which remained intact reminded me of large upturned bowler hat crowns. 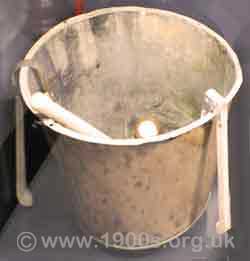 The container for the water from a dismantled copper in Milestones Museum in Basingstoke. It is unusual in that it really is made of copper rather than cast-iron and does not appear to have the more common rounded bottom for easy cleaning. The photo also shows wooden tongs for lifting clothes in and out of the water. 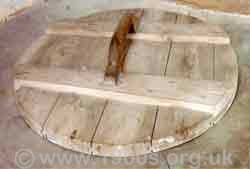 Wooden lid of the copper. 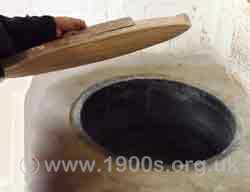 The lid of an original copper lifted to show the cast iron interior.


How the copper was filled with water

Coppers were mainly used on Mondays for the weekly wash - an ardous undertaking with no modern conveniences, made no easier by having to fill it with water.

As the container for the water was built-in and could not be removed, the water had to be added and removed with a bucket or ladle which must have been very heavy work. The coppers on the working-class Huxley Estate took about six regular sized bucketfuls to fill.

How the water was heated

The water was heated with the coal fire which was laid and lit through an opening in the brickwork under the water container, and there was an opening to provide a flow of air and to collect the fallen ashes.

Lighting the fire had to be the first task on washdays to give time for it to heat up enough to heat all the water.

The flue or chimney was normally behind the wall against which the copper was built, and it led into a chimney serving another adjacent fire of some sort. On the working-class Huxley Estate, the adjacent fire was the kitchen range; at Jane Austen's house it was a fireplace and a bread oven.

In some buildings there was a control in the wall of the chimney which could be pushed in and out to control the air flow to the fire and hence the temperature of the hot water.

The wooden lid kept the inside of the copper clean and also kept in the steam and heat when the copper was in use.

How the copper was emptied of water

Although most coppers had to be filled and emptied with a bucket, we were rather proud that ours had a tap at the bottom for emptying.

A tap so close to a fire would have become too hot to handle, which is probably why most coppers didn't have one. In general, coppers had to be ladled out. It wouldn't have been possible to get the last dregs out this way, so I assume that women wiped round the copper with cloth of some sort.

The copper lid as a toy

As a young boy, I used to enjoy wielding the lid of my grandmother's copper as a shield.

Where to find coppers today

You can usually find a copper or part of one in a large museum, but it is often a reproduction, not connected to a chimney. The first of the following pictures is an example.

Existing original coppers are usually in a decrepit state, located wherever there is enough spare space for no-one to bother to knock them out, as in the second of the following pictures. 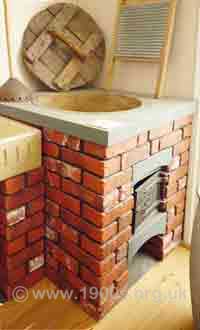 This reconstruction of a copper at Blaise Castle House Museum shows another arrangement for feeding in coals and removing ashes. It is not plumbed into a chimney, and could never actually work. 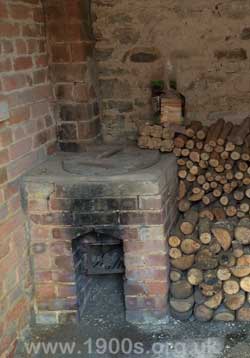 Typical of surviving coppers, found in outhouses or basements used as storerooms, not in kitchens. Photo courtesy of Michael Wright.