The scullery in a Victorian house

In the early 1900s when I was a child, the scullery was where the food preparation, cooking and washing took place and where brooms and brushes were kept.

The sketch shows the arrangement of the scullery in the typical Victorian-style terrace house where I grew up.

The entrance to the scullery was from the kitchen.

The floor was stone and it was two steps lower than the rest of the downstairs, probably to allow for water inevitably getting splashed and spilt on washdays.

The scullery table and other whitewood items

Against the window was a white wood table made by one of the carpenters at the local hospital. In fact, lots of things were made of plain unvarnished white wood - the breadboard, the lid of the copper, the knife box and green squeezer - and they all had to be scrubbed to keep the dirt out of the grain.

Large items in the scullery

There was a large kitchen range, also known as a cooking range or a 'kitchener'.

However this range was boarded up when I was a teenager because my parents felt that it was a fire hazard. They were right because I remember a red hot spark from the chimney of one of the other of our terraced houses getting into our chimney and setting the wooden surround alight. Through the presence of mind of my elder brother, the fire was brought under control quite quickly.

Next to the cooking range, in the corner was the copper for heating our water.

On one of the walls was a naked gas jet with a slit-shaped nozzle. When it was lit it gave off a flame which was fan-shaped because it never had a mantle. The page on lighting explains why gas lights did not always have mantles.

Off from the scullery was a small alcove or cubby hole for the sink with a single cold water tap made of brass. This was the only water supply in the house. Hot water had to be heated in either the copper or in a kettle.

Brass cold water tap, the only water tap in the house. 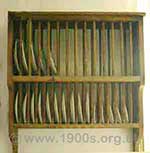 The alcove was well planned as it did afford some privacy when we washed there because it could be closed off with a curtain. On the wall was a wooden plate drainer and a soap box. No exotic soap ever found its way there, just ordinary household soap, usually with little pieces of grit embedded in where my mother had used it to wash the floor. We used it for washing ourselves, but I don't think our complexions suffered because of it.

The scullery had a side door into the yard which led to the back garden and the outside lavatory.

* Photographed by the webmaster in Fagans Museum of Welsh Life.