a typical estate a typical
house rents,
costs and incomes house
plans the
kitchen the
kitchen
fire the
scullery the
parlour the
bedrooms the
windows the
front
approach the backyard and
garden the
outside
lavatory

In the Victorian style terraces where I grew up in the early 1900s, the outside scullery door led to a path round the back of the house to the outside lavatory. This lavatory was the only one for the house. It was a small cubicle of a place, not unlike the old outdoor privies, except that it was part of the main building of the house and there was a flush - more of which below.

The lavatory building and location 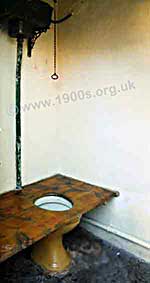 Inside the lavatory of an everyday Victorian/Edwardian terraced house.*

The lavatory was brick with a slate roof construction, built onto the back of the scullery, but only accessible from outside in the yard. Fortunately my father's lean-to shed provided some protection when going out to it in bad weather.

The door to the lavatory

The lavatory door consisted of tongue and groove lengths of wood about four inches wide. There was a space 6-8 inches top and bottom which meant that the room was open to the elements and thus well ventilated - albeit cold in most weathers. The door opened and closed with a farmhouse-style up-down latch with an slide bolt inside for privacy.

Our lavatory flushed! This was very modern indeed for the time and meant that we didn't have to empty the waste ourselves, as with the old outdoor privies. The flush operated by pulling the chain shown in the picture. This released the water up in the cistern.

In other houses with pull-chain flushesthere I saw various shaped bowls and usually the front would have been boxed in.

The water for the flush

The white flush pan was fed by a water cistern made of cast iron which was attached to the wall and supported by iron angle brackets situated about eight feet from ground. Its water was fed to the flush pan through a lead pipe about 2½ inches in diameter. It was efficient in operation and the only repairs needed would have been new chain pulls, ball valves and water feed washers.

The lavatory basin and the sewer

In the unmodernised houses in the oldest road of houses on the estate, the loo basin was a steep conical shape. There must have been a U-trap somewhere just underground because there was no smell. The main sewer ran along the length of the whole road, along the backs of the houses in line with the loo outlets. There was the occasional manhole along that line.

The bowl of the lavatory was set into a box-like container which went the width of the cubicle. The lavatory seat consisted of planks of white wood with an appropriate hole to sit over. The planks went across the whole width of the room as shown in the above photo, and my mother scrubbed them every weekend. 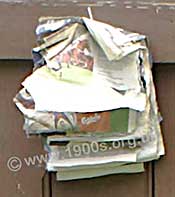 Squares of newspaper on a string, to serve as toilet paper**. In practice, the old newspapers would not have had any colour, being solely black print on white.

There was no toilet paper as such. I don't think it existed, as I never saw any. We used newspaper cut into approximately six inches squares, pierced though with a meat skewer, threaded with string and hung on a hook. It was accepted common practice to read from these pieces while sitting in the lavatory. No-one thought about germs.

Newspapers were common in all but the poorest of homes. There was no radio or television so newspapers and the cinema were how we got our news. In fact, if we hadn't had newspapers we wouldn't have had toilet paper.

These lavatories all may sound crude but we never expected anything different. To us, what we had was the height of sophistication. My mother's mother, like many other families of the time, still used an outside privy lavatory and chamber pots. We too used chamber pots when the weather was bad and during the night. Elderly and sick people used commodes.