Although the Victorian-style terraced houses where my mother grew up in the early 1900s were state of the art at the time with flush lavatories, most working class families in older properties lacked such modern conveniences. My mother wrote that one of her grandmothers lived in little more than a hovel and used an outdoor privy as a lavatory. 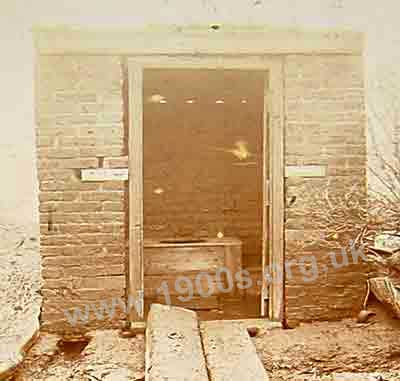 Privy at the Tottenham Tile Kilns. Photo taken in 1897. Either the door opened inwards or it was off its hinges, leaving only a thin slat behind.

The location of a privy

All privies were down an outside path somewhere to keep the smell away from living quarters, and they were used in all weathers, rain or shine. However chamber pots were used inside the house, particularly during the nights.

Some privies were in wooden huts and some were brick-built. The roofs sloped to let the rain drain off, and the doors had ventilation in them (above eye level) to keep the air as fresh as possible.

The lavatory seat was made of wooden slats with a hole to sit over. Some families had two holes of different sizes to accommodate the children. Or there was just one large hole. Sometimes there was a board behind to lean on, so that users could line themselves up with the hole.

Keeping the privy as fresh as possible

Not even a privy? - use a tree

I am told from first-hand recollections that certain poorer people in rural Ireland did not even have an outside privy. They just went outside and leant against a tree. It seems likely that this practice was widespread everywhere in labourers' families during the 1800s and earlier; it just did not and does not get reported.

There was no water flush.

A privy was kept fresh by sprinkling the products of a visit with whatever was readily available and would serve the purpose. Ash was an effective common commodity at the time as open fires and cooking ranges were the only forms of heating. Sawdust was also used, as was plain garden soil. I wonder if a bucket of water could have been thrown in, but no-one has experienced this.

Apparently some privies had a lever system which 'flushed' like modern lavatories, but with the ash or sawdust - but by all accounts they never really worked effectively.

Disposing of the contents of a visit to a privy

There seem to have been various ways of disposing of the products of a visit to a privy.

The principle of one type is shown in the following diagram. The area under the seat was open at the back and there was a sloping floor to let urine drain out behind. Presumably one person's urine helped to wash out the previous person's faeces, although the occasional bucket of water probably helped. Behind the privy was a compost heap for any rubbish that would rot down. This 'enhanced' compost heap was said to be a great soil improver for the garden. If or when the privy got blocked up, there were contractors who would come to dig it out and empty it.

The principle of the draining privy. The area under the seat was open at the back and there was a sloping base to let the results of a visit drain out behind. 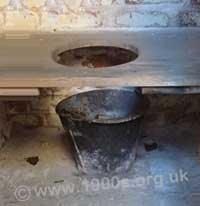 Privy with a bucket under the seat to catch the products of the visit.

In another type of privy, a bucket was placed under the hole(s) in the seat to receive the products of a visit. It could be an ordinary tin bucket or a specially made one which was wide at the top with an oval basin. This bucket was taken out at intervals of between a day and a week, and its contents either buried or put onto a compost heap.

The 'night soil man' provided another way of disposing of the waste. He could be engaged to come round by cart to do the emptying. This was usually at night so that he did not disturb the occupants of the house.

My aunt told me that she once saw the night soil man's cart coming and warned her friend that they should cross the road. Apparently the pong hit them soon afterwards anyway, and it was atrocious!

Toilet paper/lavatory paper was newspaper, cut into squares, pierced with a skewer and hung on the wall with string, as in the lavatories of the Victorian-style terraces.

The coming of mains drainage

Mains drainage did not come to some rural areas until the 1950s or even after that.

Where my family lived in Louth Lincolnshire, mains drainage did not arrive until in the 1990s!

I am grateful to Bill Hogg, Anne Davey and Phyllis Durbidge (born Phyllis Money) for an additional to material for this page.