Recollections of oil lamps in use

My mother's written recollections of life in her childhood in the early 1900s told of her grandmother who was very poor and who lived in a much smaller and older house which had no gas. The only lighting was by candles and an oil lamp which stood in the centre of her table.

An intact antique oil lamp. photographed at the Willis Museum, Basingstoke. This is a particularly elegant lamp from a wealthy house. The one that my mother describes had a frosted glass globe instead of the pink 'shell' shade and the brass was almost certainly plain rather than decorated.

My mother wrote that in the morning when daylight came, her grandmother would check the wick of the oil lamp and trim off the charred top with scissors. Next she would top up the oil. Then she would wash the globe with soap and water using a wash leather, and then polish it with a duster. If there were any sooty smears left, she would polish it again and again. This was to make sure that the lamp gave out as much light as possible.

The globe of an oil lamp

Oil lamps had what was known as a 'globe' which was a glass shade which was not necessarily spherical. In the first picture, the globe is the pink 'shell'. In the following picture one is cylindrical and the other is reminiscent of a brandy glass. Irrespective of the shape, there was always an outlet at the top to serve as a chimney. 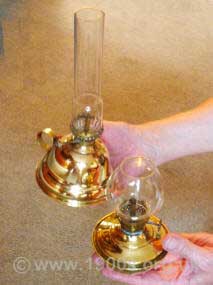 Small oil lamps of the sort used for carrying around

The globe served several purposes. It contained the flame, making the lamp safer than an open flame; it held the soot which bright yellow flames always produce; it steadied the light by shielding the flame from draughts and, if it was frosted, it spread the light better.

Globes were removed for lighting the lamp and afterwards for washing. The washing was essential because the flame was sooty.

The oil was paraffin of the sort that my mother wrote of as being sold in the oil shop. At the base of any oil lamp was a container to hold the oil.

Wicks for oil lamps were more bulky than the wicks of candles, and were bought from quite long rolls. 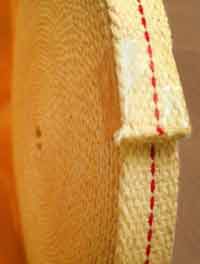 A roll of flat wick

There were several sorts of wick, depending on the lamps that they were to fit. They were generally flat but there were also hollow circular ones. Some lamps were fitted with openings for two wicks so that the lamps would burn more brightly.

The tube-like structure of a circular wick

Inside an oil lamp, wicks were almost entirely submerged in the oil. Just a couple of millimetres or so would be held above the surface.

Left: The wick of an old lamp at the point of lighting. Right: after lighting as the glass chimney is being put over it. Screen shots from old films. 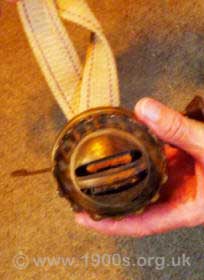 Looking down on part of a dismantled oil lamp with two wicks, showing the support that held the wicks such that short lengths were kept above the surface of the oil. The wicks are shown trailing underneath. In a reassembled lamp they would be loosely coiled in the oil.

The oil seeped up a wick into the short part above the surface of the oil and was set alight with a spill or a match. The oil then burnt and the flame gave off a bright yellowish light.

Wicks inevitably got charred. So they had to be trimmed with scissors to prevent the flames giving off too much sooty smoke. Consequently the lamps were made with a screw or lever arrangement for each wick to wind it upwards. These arrangements are shown on the adjacent photos.

The lamps in the final photo are small more portable ones of the sort that would be used for taking into a bedroom or an outside lavatory rather than lighting a living area.

The end of oil lamps as the main source of lighting

I understand that oil lamps were the main source of lighting in rural areas up until the 1930s when the National Grid brought them electricity - but see also gas lighting.

I am grateful to Bill Hogg and Anne Davey for their explanations of the various parts of the lamps and their functions. All the photos, apart from the one with the fluted shade, were taken from Anne's own collection. Her lamps are originals, and the brass gleams like reproduction lamps simply because she polishes it regularly with metal polish.