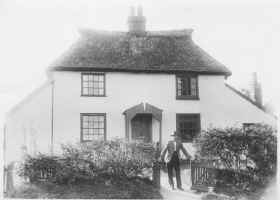 The old village house which gave rise to the experiences described here. It was originally the Postmaster's house and was called 'The Old Post House'. Most old rural cottages were much smaller.

Old rural properties grew up in a haphazard manner with different room layouts, often tiny. They were mainly occupied by manual workers and farmers although there were also some white colour workers, such as postmasters. The cottages and houses were not parts of housing estates like the Victorian terraces or the 1930s estates.

The facilities described below would have been common to them all.

When I was a baby in the early 1940s, I was evacuated to my grandparents who had retired from Edmonton to the country village of West Wratting in Cambridgeshire. My cousin was already there. Her experiences are in the second box below.

extract from the memoirs of
Brenda May Wilson, courtesy of her son, Kevin Flynn

Early in 1931 when I was four years old, I was taken to live in the country - at Blackwell Cottage, near Clun. Life was simple.


The house was quite old; very little, if anything, had been modernised. The facilities were extremely basic. My mother hated it so much that she quickly returned with me to the dangers of the London blitz, but my cousin stayed on.

Getting and using water

ALL our water had to be carried from a stand-pipe across the road or from rainwater butts. So, as you can imagine, every drop was precious. Recycling it was essential and meticulously practised. The village pump was too far away for anything but an outing for me as a child. 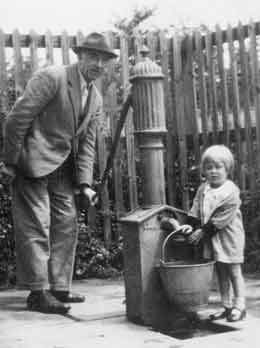 Getting water from a pump. 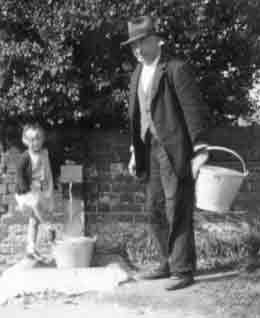 Getting water from a standpipe.

Laundry was a major affair. Outside in the garden was the wash-house with a brick copper, various tin baths, including a full-sized one to take an adult, and a mangle.

On Monday mornings, the first task was to light the copper to heat the rainwater from the water-butts. (Once the water was hot, the procedure was very much as it was in older times, as described on the washday page.)

After the laundry was finished, the warm soapy water was used for washing the floors. The final rinsing water was heated for our baths.

Outside in the garden behind the wash house was the lavatory, actually a privy - a wooden bench with a hole and bucket; newspaper for toilet paper; hurricane lamp for the dark nights. It was my grandfather's job to empty the bucket and bury the contents in the garden. Rain, hail, snow or shine, this was what we used except during the night when we had chamber pots.

Lighting was by oil lamps and candles.

Food: getting, preparing, storing and preserving

There was one shop in the village, not the selection of shops that we were used to. The meat came by van, as did bread and main groceries. (The van was the one thing that let us know that we were in the middle of the 20th century. Before then, it would have been a horse and cart.)

We had to fetch milk daily from the local farm, taking our own jug.

Yet, in spite of having to do the day-to-day cooking on the very basic facilities of the kitchen range, my grandmother also made jams, preserved fruit, and made our cough mixture for the winter (with blackcurrants, honey and vinegar - no lemons). 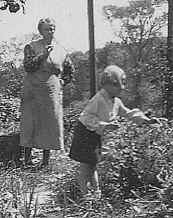 Picking fruit in the country during World War Two.

We never had any fruit or vegetables that weren't in season or preserved by my grandparents. Apples and onions were stored in the spare room. My grandfather made his own wine, and root vegetables were clamped up for the winter.