The mangle, used in the past to squeeze water from wet laundry

Mangles and wringers: what they were used for 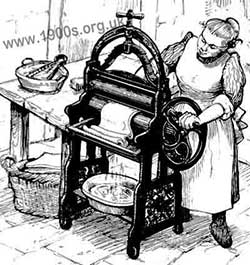 Sketch of a woman mangling

Before the arrival of spin dryers around the 1950s, all but the very poorest of households had a mangle. It was used on washday to remove the majority of the water from the wash after each rinse.

(A widely used word nowadays is 'wringer' which is surprising because 'wringing' means twisting, and no twisting is involved in mangling. Mangle was the only word used in Britain in the past.)

The mangle was a heavy mechanical contraption about four or five feet high with a handle that turned two rollers. Wet items were fed through the rollers which squeezed out the water into a large bowl or tin bath underneath.

There was a screw on top of the mangle to adjust the distance between the rollers according to the thickness of the fabric. For blankets, for example, the screw was let out as far as possible.

As the mangle was so large and took up so much room, it was kept outside the back door with a sheet of tarpaulin over it to protect it from the weather. This was usual practice in the Victorian terraces where I grew up in the early 1900s.

(Later when I was married, mangles were smaller and mine fitted into the kitchen of my 1930s/1940s house.)

How the mangling was done

On washdays in good weather the mangle could be used outside where it stood, but in bad weather it had to be rolled indoors. 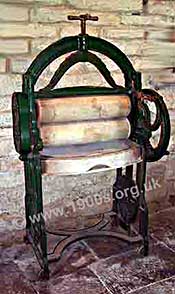 Small clothes like socks could go through the rollers as they were, but larger items had to be folded into strips which were narrow enough to go through the rollers. For sheets and blankets this folding was a two-person job, with one person at each end of the sheet or blanket, and care had to be taken to keep it off the floor. If no-one was available to help, the pegs on the clothes line could sometimes replace the second person.

When my brothers and I came home from school for our mid-day meal, mangling was still in progress on washdays. A lot of energy was needed for it, and I had to help by holding the sheets as straight as I could while my mother turned the handle.

When items had gone through the rollers, they almost looked as if they had been ironed already, but they were still quite damp and needed to be dried and ironed. Drying the wash and ironing are on separate pages.

It was by no means unusual for children to get their fingers caught in the rollers.

Fingers trapped in rollers was SERIOUS!

I never used to unplug my Hotpoint electric wringer machine because I had never-ending laundry. Then one Sunday morning while my husband and I were having a lie in, we heard a scream, galloped downstairs, two at a time, and found my daughter, aged 3, with her whole arm in the wringer.

The wringer automatically stopped and opened if the clothes were too thick to go through, but her little arm had not stopped it until it had gone far in. She had a greenstick fracture in two places. I’m happy to say she did recover without any ill effects but I lost 6 months off my life.

Perhaps it was understandable that women risked using the mangle on clothes with buttons, rather than having to wring the water out by hand, but then the buttons invariably chipped under the pressure of the rollers, even with the top adjustment loosened.

In the 1940s, while I was growing up, it was not unusual to see people with broken buttons, almost certainly because someone had risked putting them through the rollers on washday.

A way round chipped buttons on clothes that were often washed, particularly on men's shirts, special buttons were available made of woven linen so that they wouldn't break under the pressure of the rollers. 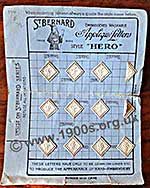 Card of square linen buttons as bought from a shop 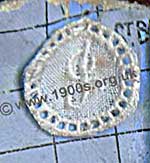 A round linen button. Linen buttons would pass safely through the rollers

A shank button for thick fabrics, which was removed for washing

Clothes like heavy overalls needed heavier buttons. The solution was to have buttons with metal shanks which, rather than being sewn in place, were poked through small holes and held in place at the back with studs or clips. The clips were rather like short hair grips.

Then every time that the item was washed, the buttons were removed and then clipped back into place afterwards. The holes for the shanks were sewn just like regular button holes except that they were much smaller and round.

Once spin dryers came on the market, types of buttons ceased to be a problem.