The forerunner of the laundrette was the 'bagwash', also known in some areas as the 'wet wash'. It was common in the 1940s and possibly before, but disappeared by the mid 1960s as laundrettes became increasingly common and families began to buy their own electric laundry appliances. 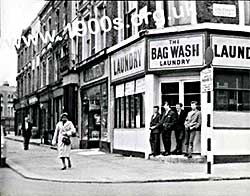 The bagwash was a means of getting fairly heavyweight white items washed by a shop. The shop did not take coloured items. These still had to be washed at home because they needed different treatments from the whites.

Customers put their 'whites' to be washed into a bag which was supplied by the bagwash shop, washed by the shop in its bag and returned to the customer still in the same bag while still damp.

The bagwash was popular and open every day for customers to use whenever they chose. It was the beginning of the end for the wash once a week on Mondays.

The bagwash compared with conventional laundries

Conventional laundries handled items separately and had to mark each one of them to prevent loss. Marking was normally with a customer number, known as a laundry mark, attached either with tape which was sewn on or with a stamp. The ink was indelible so did not wash out. In contrast bagwash items never got separated and almost never got lost. So they didn't need a laundry mark.

Conventional laundries returned the washing washed, ironed and aired. In contract, bagwash laundry was returned clean but un-ironed, still damp and needing to be ironed and dried at home.

Conventional laundries could handle types of fabric and colours as well as whites, whereas the bagwash only washed fairly heavyweight whites.

Because conventional laundries did so much more than the bagwash, the bagwash was a much cheaper alternative.

Some bags were like a soldier's kitbag and would hold 20 to 35 lbs of clothes. Others were like a sack, i.e. with no shape, much like the sacks for potatoes, but bigger They were made of a fairly sturdy thick cotton or linen which was permanently marked with a name or number which identified the owner. This had to be reprinted from time to time as it gradually faded. 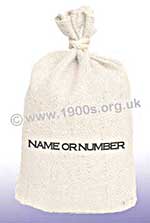 The bag did up with string.

How the laundry got to and from the bagwash shop

There was disagreement about how the bag reached the bagwash shop. Some people remembered that it was the task of a member of the family, often an older child, to wheel the bag in some sort of trolley, pram or push chair. They would be given a ticket which they had to produce in the afternoon to collect the clean laundry.

Other recollections were that the bag was collected and returned by van. Probably

in some places both were options. It was probably a matter of how customers were prepared to pay.

How we took the dirty washing to the bagwash shop

Once a week our bagwash was loaded on the pushchair and pushed up the hill to the bagwash shop where we queued up with all the other prams. On the way back the youngest child in the family got to ride in the pushchair. This was in the late 1940s and early 1950s. On the way back our empty pushchair was often used to collect coke from the shop next door. So next time the youngest child sat in the push chair, they either had a damp bottom or a black one.

The washing process at the bagwash

None of the people I spoke to actually saw the washing being washed, but most of them were certain that it was washed in its bag and that washing meant boiling in soapy water, probaby with soda. This is certainly reasonable because, in the days before washing machines, it was customary for women who did their own washing to boil and rinse their whites rather than actually washing them. The action of boiling with soap and soda did the cleaning. So it seems likely that the bagwash shop had something like a large copper in which it boiled a number of bags together - but see the personal and rather different observation in the box below. Clearly processes varied.

An alternative to washing in the bag

My husband told me that he often arrived at the bagwash before the family's bags were ready, and he used to watch the machines.

The bagwash laundry used machines which looked like huge boilers. There was an outer and an inner shell. The inner shell had separate segments, and the washing and the open bags were tipped in, one per segment. The outside shell containing the lid was locked down, then the washing was boiled, rinsed, drained and spun. When the machine finished, each bag was pulled out and filled with its washing. The machine process was much like our washing machines of today, only bigger, except that the machines were segmented and took lots of bags at one go.

Apparently the returned washing smelled of bleach. So probably bleach was put into the final rinse. Maybe this was an option. I wonder if the bluebag was also used.

Still work to do back home

Drying the wash back at home

Our damp washing was hung out on lines strung across the kitchen ceiling. It was we children's job to do this, by standing on the table top. My mother would stand at the bottom handing up the next load and making sure we didn't fall off. We climbed up again later and changed the dry stuff for the next load. We did quite quite enjoy this but the sheets were heavy for us to manoeuvre.

The damp was so great we couldn't see across the room and the walls ran with water, but the washing did dry from the heat of the cooking.

The end of the bagwash

Bagwash shops died out in favour of laundrettes for two main reasons. One was that laundrette washing machines could be set for any type of fabric whereas the bagwash only catered for whites that could be boiled. Also laundrettes had tumble dryers, whereas washing from the bagwash was always returned damp.