The laundrette in its 1950s heyday

Why laundrettes were so popular

Although twin tub washing machines had arrived in the 1950s, few ordinary people could afford them - and certainly they were well out of reach for newly married couples such as my husband and me in the early 1960s. The solution was to go the laundrette. 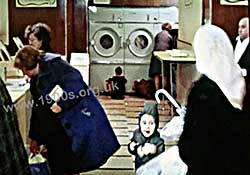 Inside a 1960s British laundrette, screen shot from an old film

This was the heyday of laundrettes. They sprang up in almost every town, and were always well used.

Like most recently married couples, we went to the local laundrette once a week taking our dirty washing with us. We walked with it, pulling it behind us in a basket on wheels. These baskets were popular, too, because cars were not for the likes of us.

What happened at a laundrette

On arrival at the laundrette, the assistant weighed our washing. We had to be careful not to be over the allowed weight and be prepared to grovel if our washing included anything already wet which, was always heavy.

Washing machines lined at least one wall. As far as I remember, they were all top loading. They were coin-operated but the washing powder in the laundrettes always seemed to be supplied. This was probably to ensure that the right sort of low-lather powder was used.

While the dirty washing was being washed and rinsed, it was a time for sitting down on the provided seats and watching other people, reading or just musing. It was quite hypnotic watching the washing going round and round.

The laundrette as a social centre

I can't remember how long a wash took, probably about half an hour. People were said to meet people and make friends while waiting in laundrettes.

We had to get up to look to see when our washing machine had stopped. Then we had to decide whether or not to use one of the tumble dryers which were on another wall. They were front loading.

There was usually a wait for a tumble dryer because there weren't many of them - and anyway they took more coins, and money was short for newly weds. Usually we decided to take the wet washing home to dry with our Flatley. There were no radiators in the sort of flat that we or our contemporaries could afford at the time, on the top floor of a suburban semi.

We also of course still had to do the ironing, but the laundrette as a lot better than having to do the washing the way our grandmothers did.