Balance scales for weighing, early 20th Century and before

Scales based on balance have been used for comparing the weights of two objects for thousands of years.

A balance works on the simple principle of balancing whatever is to be weighed on one side of an arm against one or more known weights on the other side.

Balance scales were the most widely used scales the early 1900s, scales based on  springs were in general use in shops by the 1950s.

It was necessary for shopkeepers to set up their scales to be set to balance properly, so that the shop was not seen to be selling under-weight. Equally shopkeepers would not want to be giving away more than they were charging for. So there was an arrangement on all scales whereby a small weight could be moved slightly one way or the other along the arms of the scales to balance up each side. Unfortunately it tends to be rather difficult to see in the photos below.

In practice, balance scales were often too rough and ready for perfect balance, or maybe the shopkeepers had to work too fast to bother. Either way, it was normal practice for them to give customers the benefit of any doubt by putting just too much on the customer's scale pan and giving the customer time to register that this was happening. Presumably there was a skill in making the 'just' as small as possible.

Types of scales for specific purposes

There were all sorts of different styles of balance scales, each one designed for specific purposes, with their pans specially shaped for efficient use. Some examples are shown in the following photographs. 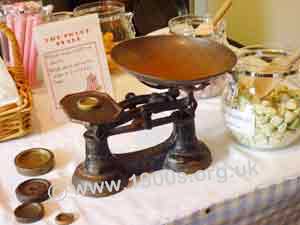 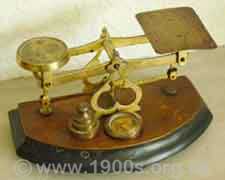 Delicate scales for weighing letters and packages for ready for sending to be posted. From the private collection of Anne Vincent. 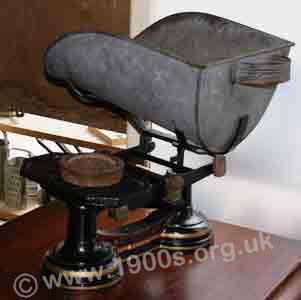 The pan of these scales is ideally shaped for digging into a sack of loose material, like grain or sacks of potatoes. They would have been used by corn chandlers and greengrocers. Photographed at Tilford Rural Life Centre. 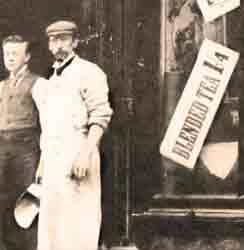 A tea merchant in the early 1900s carrying the pan of scales suitable for digging out tea from a sack. Detail from a photograph in Farnham Museum.

The 'goods' pans of the scales above and next are both flat and easy to clean, making them suitable for weighing out fats and cheese - although in practice a fresh piece of greaseproof paper was placed on the pan for each customer in which their purchase was later wrapped. The pan shown above is marble and the next one is china. They would have been used by grocers. Photographed at Milestones Museum in Basingstoke and the Museum of Nottingham Life. 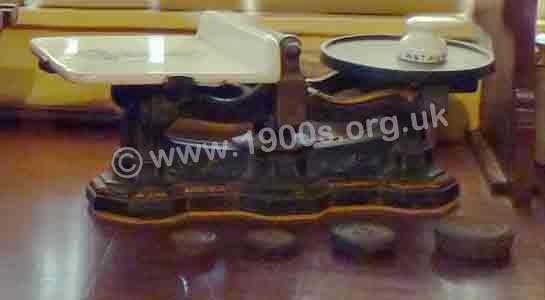 See the caption for the previous photo 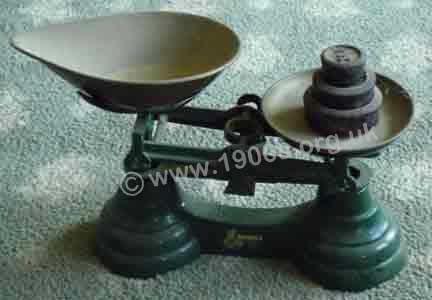 Scales ideally shaped for tipping out goods into a much smaller receptacle. Such scales would be suitable for greengrocers when tipping vegetables directly into customers' bags and for women when weighing out ingredients for baking. From the private collection of Angela Leahy. 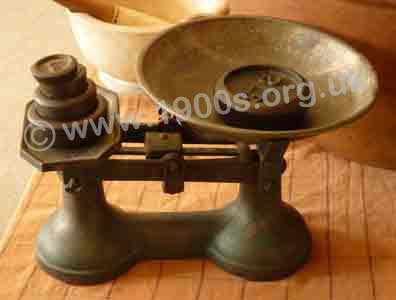 Scales using a sliding weight system as well as standard weights. The sliding weight could be moved along its own arm fitting into notches, as a quick way of weighing out smaller weights like ounces. From the private collection of Angela Leahy. 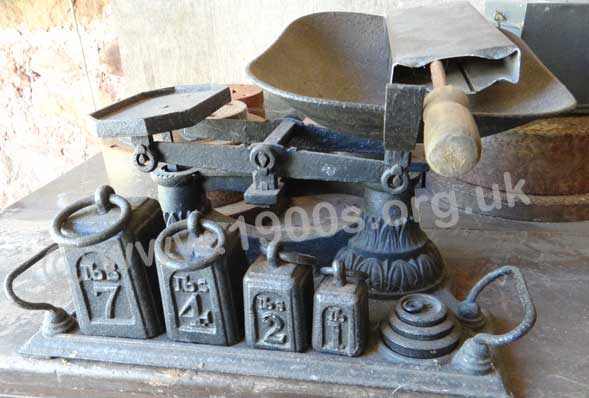 Believe it or not, my mother did all her cooking and baking with scales like these. That was in the 1940s and 50s. The scales were inherited, so would have been Victorian.

Most of the above photos show the weights that were used with the weights - generally round brass or iron ones that stacked for tidy storage.

There were also heavy duty weights that incorporated handles for lifting, and there were extremely delicate weights which were used by pharmacists for making up prescriptions. The delicate weights were stored in air-tight boxes to avoid contamination from the air. They were shaped with 'necks and heads' so that they could easily be grasped with the tweezers that were stored with them to prevent greasy fingers from altering their weights. The following photographs were taken at Milestones Museum in Basingstoke. 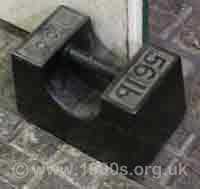 A 56 pound iron weight, perhaps not surprisingly used as a door stop. 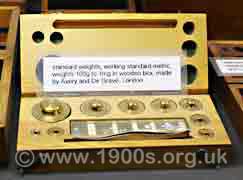 Weights for delicate work, like weighing out powders in a pharmacy. These weights were kept in an air-tight box with special tweezers for handling them. 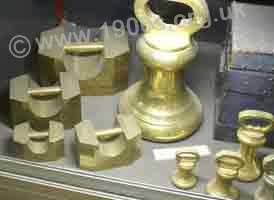 With balance scales, shopkeepers needed to work out prices in their heads (which they did not have to do with spring balances) but the calculations were not particularly arduous because it was normal practice to sell in simple fractions or simple multiples of a pound weight (or whatever was the appropriate unit of weight for the goods).