To state the obvious, when a something pushes down on a spring, it is depressed and when something pulls down on a spring, it is extended. Spring scales work by measuring how far a spring is depressed or extended on a scale which has been previously calibrated using known weights. Examples today include luggage weighers that extend a spring and bathroom scales which compress a spring. The weight and resistance of the spring is chosen by manufacturers to suit what is to be weighed. 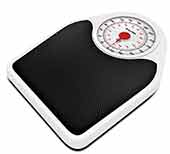 The luggage weigher has a digital display whereas the bathroom scales have an analogue display.

Today, most spring scales use an digital displays; analogue displays would be regarded as old fashioned, although they are usually preferred for clocks and watches.

Shopkeepers were quick to spot the significant advantages of spring scales and were starting use them to replace balance scales when I was shopping as a child in the 1940s and 50s. However the old style balance scales were still used for heavy goods like potatoes and builders' materials. The main advantages were as follows:

The Imperial System of Weights

The spring scales that I knew that made pricing so simple looked like the one in the following photo. The spring was under the scale pan and attached to a pointer that moved over a scale to show the weight of what was being weighed.

The goods to be weighed were placed on the pan, and all that the customer could see was the pointer on its scale moving across the scale to show the weight of what was being bought. 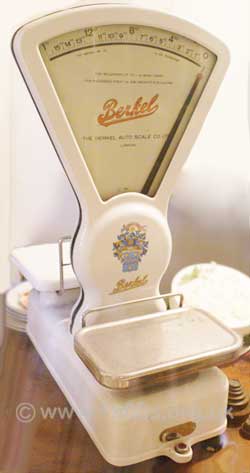 Type of spring scale that did the arithmetic for the shopkeeper - as seen from the customer's side. All that the customer sees is a scale and a pointer showing the weight.*

Pricing didn't seem to concern shopkeepers at all. They just announced the price as if it were obvious.

This worried my mother. She said that she had always been regarded as excelling in mental arithmetic at school, but there was no way that she could come up with prices so quickly. How could this be?

Explained: The simplicity of pricing with these shop spring scales

I was able to explain to my mother how shopkeepers could come up with prices so quickly when weighing out odd fractions of weights because I had worked on sales jobs in my school holidays.

The shopkeeper's side is shown in the shown in the following photo. At first glance the background is a mass of numbers arranged in arcs. The pointer is also a list of numbers. It is in fact a double pointer. Although the front part which the customer sees is blank, the numbers on the shopkeeper's side of the pointer actually show is a list of prices per pound with the cheapest a the bottom. 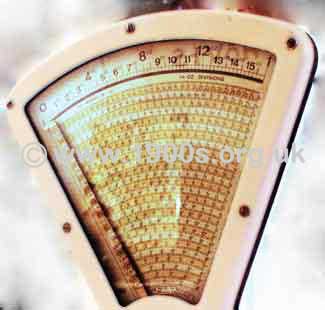 Shop scales based on compressing a spring underneath the scale pan - as seen from the shopkeeper's side.*

The arcs are labelled with actual weights and the system is calibrated so that as the pointer finds its position for a particular weight, the shopkeeper can look for the price per pound on the pointer and read off underneath what the cost is for that weight.

Detail of the pointer and background on the shopkeeper's side, marked in prices per pound, where the prices are in the pre-1971 system of pounds, shillings and pence.