Greengrocers: sellers of fruit and vegetables

A greengrocer is someone who primarily sells fruit and vegitables. Greensgrocers shops or just greengrocers were seen in most town centres up to the late 20th century when their numbers started to diminish as the popularity of supermarkets increased.

When I was a child on the Huxley Estate in Edmonton in the early 1900s, our local greengrocer was Mr Rice. He and his family lived above the shop as was common of shopkeepers at the time. 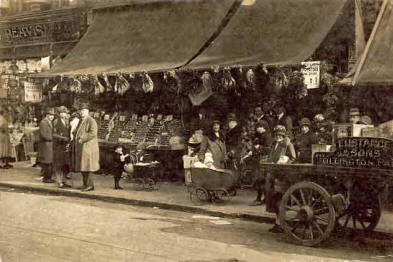 A greengrocer's shop in the early1900s*

Tap/click for a larger image which shows the wealth of detail, eg. the flat part of the delivery cart for the scales; the price of potatoes - 12 pounds for a shilling; the baby prams; the toy prams, etc

I remember Mr Rice mostly on a hot summer's day, when he would tuck a large cabbage leaf into the back of his cap to protect his neck from the hot sun, and the horse would have straw caps on his ears to keep off the flies. Mr Rice would put the tailboard of the cart down flat and place his scales on it to weigh out whatever his customers wanted.

Greengrocers did a good trade because people ate a lot of fruit and vegetables. They were sold in season at their best and were cheap and filling.

We children regularly spent some of our pocket money at the greengrocers, mainly on locus beans. They were often full of insects eggs but we weren't put off. I really liked them.

When my mother brought gooseberries for pies, we children had the job of topping and tailing them with small scissors. It was a horrible job.nStoning the cherries was fun though because there were often two stalks together and we would dangle them over our ears as earrings.

The scales were the balance sort with weights on one side and a pan for the goods on the other. He tipped the goods straight into customers' their baskets.

Early shop till, as described below by Bert Felgate **

The till in our greengrocers was a large block of wood with several hollows dug out for the different coins. The shape of the hollows made it easy to pick up coins quickly to give as change.

Fixed to the block was a strip of metal (not shown in the photo). If a customer offered a half crown it was quickly scraped against the metal to see if it was genuine and not home made in lead!

Our greengrocer and his wife worked together. He brought his wares out round the streets with his horse and cart, leaving his wife and a young girl to mind the shop. 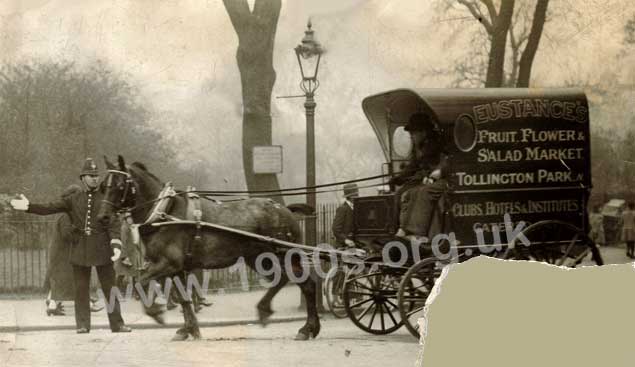 Tap/click for a larger image and note the gas lamp; the policeman's uniform and the blinkers on the horse's eyes to prevent distraction from other road-users.

The person who helped in the shop was not Thomas and Amelia's daughter, but a young girl who was employed by them to help with the family and in the shop. However, Amelia probably treated her like a daughter which is why customers thought that she was.


A note on the census from the webmaster

The 1911 census shows that my mother's memory was absolutely right: Thomas Rice, a greengrocer, age 32, lived at 81 Silver Street, presumably above his greengrocer's shop. He was born in Alresford, and lived with his wife Amelia Rice, 30, born New Cross, with their sons Thomas Richard, 3, and Arthur George, 1, both born in Whitechapel. Amelia assisted in the business.