Toys for young children in the past

As explained at the beginning of the toys for small children page, my recollections are as much about 1920s and 1930s toys - even though I grew up in the 1940s. Whereas that page describes and illustrates the earliest toys that I can remember, probably when I was somewhere between one and three years old, this page is about the toys I remember when I was a few years older, possibly somewhere between four and six. These toys, like my earlier ones were second hand, handed down from families with older children, and I was expected to hand them down to younger children in due course.

I had a scooter, which was presumably a hand-me-down, but it did not get used much. It was not really robust enough for outdoor use and there was not enough room indoors without bashing into furniture. It got passed on quite quickly. 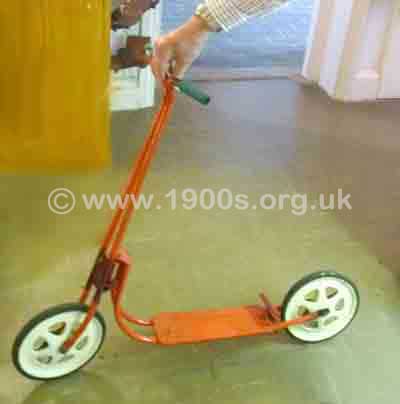 Scooter for a small child. Photographed in Milton Keynes Museum.

As pipe smoking was common among older men in my childhood, pipes were readily available in the shops. As well as the expensive wooden ones, there were the cheaper clay ones. I remember being given a clay pipe and a bowl of soapy water and taken upstairs to blow bubbles out of the window.

It was a disappointing and frustrating experience because soapy water does not hold large bubbles the way that detergent does - and detergents were some years into the future. So all I really got were soapy droplets. I suppose some people must have made it work, or the activity would not have been suggested. 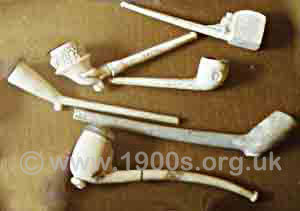 Men's clay pipes, given to children as toys for blowing soap bubbles. These pipes, photographed in the Cambridge and County Folk Museum, show elaborate as well as plain pipes.

My dolls pram was a hand-me-down. It was just like a real baby's pram except that it was smaller. It was kept in our hall and was very much in everyone's way. I seldom used it because it held my mother up if I took it shopping. So she must have been rather relieved to pass it on. 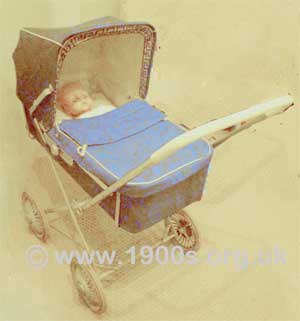 My uncle made my dolls house originally for my eldest cousin. It was a superb piece of craftsmanship, and I have never since seen anything like it. It was a bungalow, with a roof that lifted off. Not only was it fully decorated, it was also fully furnished with furniture that properly fitted the sizes of the rooms. I understand that he made it from a kit, but nevertheless it must have taken him months. I wish I had a picture of it. All the other dolls houses I have seen have at least two floors and are front opening. 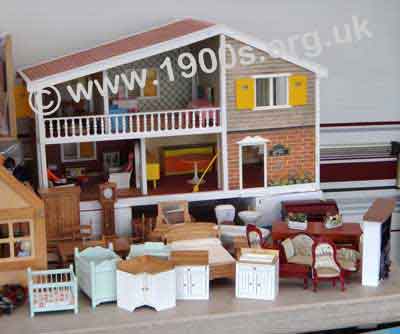 The most common type of dolls house, on two floors, opening at the front. Photographed at Rughill Steam Fair.

Needless to say, my dolls house was claimed in due course by a younger cousin. I was heartbroken to see it go.

I spent hours with my toy theatre. It was actually in the thick back cover of a large book of pantomime stories. The book propped open to reveal a theatre with a stage and paper curtains. 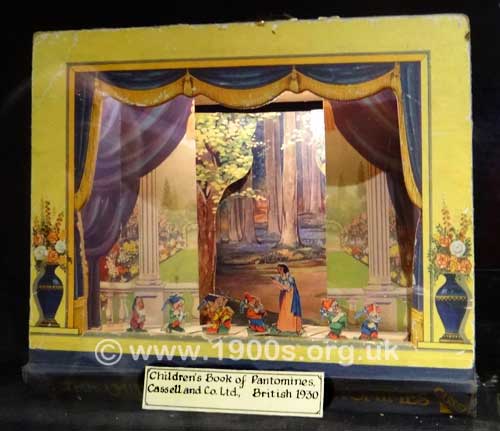 Toy theatre, inside the back cover of a large book of pantomime stories.

The toy theatre in the photo is just like mine was. Museums show other versions, but I only ever saw this one when I was young. I certainly remember how tatty it was by the time it reached me, but I still spent hours with it, inventing my own stories and characters.

The 'actors' for my toy theatre were figures and objects - which most children already had. They were beautifully painted, presumably by hand and, being lead, could be bent into various positions. The fact that lead was poisonous never entered anyone's mind.

Incidentally one of my lead objects was a tiny battleship and I do remember that it was bought new in a toy shop which soon had to close through lack of stock. It would seem that the war effort included toy propaganda for children. Owning a toy battleship didn't strike me as in the least surprising, because battle ships seemed to be mentioned all the time on the radio's news.

I dragged my toy actors around from the wings of the theatre using stiff wires bent into hooks at their ends which I suppose that my father must have provided.

Painted lead figures, manufactured as children's toys. Because lead was soft, the figures could be bent into various shapes. Photographed in Chertsey Museum.