The game and how it was played 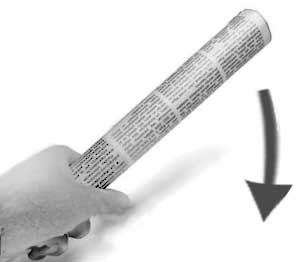 Flipper made out of sheets of newspaper

The basis of the game was to use the flipper to bang the ground behind the newspaper cutout to make a movement of air to move the paper kipper forwards. The first person across a nominal finishing line was the winner.

This page describes how we played the game in my childhood, but there must be variations.

A game for older girls, boys and young adults to play together.

Equipment for playing 'Flip the Kipper'

• Old newspapers
• Scissors
• At least a 3 metres of clear floor space, indoors or out

Although it can be fun for the players to help clear the floor space and cut out the shapes, if the players should not use scissors or the party is more formal, the cutting can be done in advance.


The rough shape of a wide fish, 20-30 centimetres long was cut out from newspaper, one for each player. The best way to do this was to fold sheets of newspaper together and cut through them, making several fish as the same time.

Then more sheets of newspaper were folded and rolled together to make fairly rigid 'flippers', rectangles about 30 by 50 centimetres: one flipper for each player.

Why the game is worth playing

What it is really important to realise about this game is that onlookers and players alike enjoy it because they find themselves laughing.

Why the name 'kipper'

Why the name kipper you may ask? Kippers, i.e. smoked herrings, were well known in the past because they were cheap and nutritious. Also, because they were sold split open, which was how they had been smoked, they were wider than ordinary fish, which was a particularly suitable shape for this game.

How to adapt the game for different numbers of players

With only a little floor space, players could play one at a time and how long it took them to pass a finishing line could be timed, with the winner being the player with the shortest time.

Or, with more floor space several players could play at a time, in which case the winner would be the first person past the finishing line.

With even more players, the game could be played in rounds with winners of each round playing each other.

My enjoyment of this game comes from childhood family get-togethers. I would like others to enjoy it too. Hence this page.