Games children used to play in the streets

In the early 1900s, when I was a child, children were expected to entertain themselves. There was no money for expensive toys, and the adults were too busy to set anything up for us. We expected nothing else and we enjoyed ourselves.

Fortunately there was little or no traffic, so the street was our playground: the roads, the pavements, and the tiny front gardens.

You may be able to adapt some of our games for children to enjoy today. 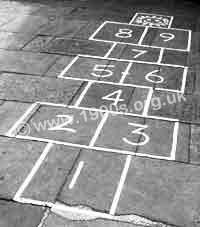 Paving slabs marked out for Hopscotch at York Castle Museum.

For playing hopscotch the concrete paving slabs of the pavements could easily be marked out with chalk. This washed and rubbed off quite quickly so was never taken amiss by anyone in my Edwardian childhood.

There were many variations of hopscotch with different rules about what to do at each slab.

Hopscotch always seemed to be a game for girls where I lived.

The wicket for our street games - a lamp post.

When we played cricket, a lamp post was the wicket.

Lamp posts were short and rather elegant, and not automatically controlled. The lighting came from gas mantles which were the same as those used in our houses.

Lamp posts were also used as winning posts in other games. 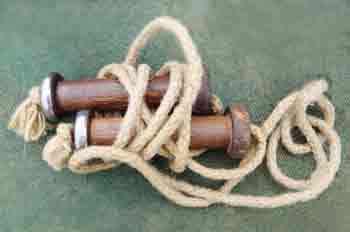 Early 1900s superior skipping rope with wooden handles containing ball bearings to prevent the rope from twisting out of shape as it swung round. Photographed in Milton Keynes Museum.

Almost certainly such a skipping rope was for children from wealthy families. Children on housing estates would have had to make do with simple lengths of rope.

Skipping was one of my favourite games, either by myself holding an end of a skipping rope in each hand or in a group where the ends of a longer rope were held by two different people.

Any number of children could come in and skip together and sometimes we tried to see how many we could get in before someone stumbled over the rope and stopped it.

Sometimes we would play at "calling in" a particular child by name and we would vary the speed of the rope so that the child doing the jumping had to jump faster or in some sort of fancy manner. 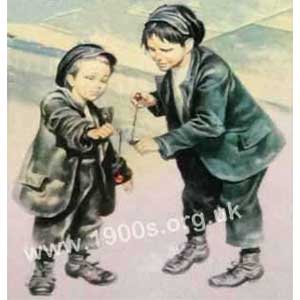 Conkers was an Autumn game. As the conkers fell off the horse chestnut trees, boys would select the firm ones and bore a hold into them. Then they would thread their conkers onto pieces of string about a foot long.

Conkers was played in pairs, and the idea was to swing your conker to hit the opponent's one. The game ended when one conker got broken. Then the unbroken conker was declared the winner.

Interestingly, the boy who owned the conker was never regarded as the winner, just his conker. My brothers sometimes asked me to play but I never did because I was afraid that a conker would hit me in the face.

Then there was 'Please we've come to learn the trade'. This is what one of the children had to say. Then the others would say "What trade?". The answer could be any trade. The children would say, "Set to work and to do it", and the trade would be mimed. The child who guessed correctly would then have the next turn.

Hide and seek had to be behind people's privet hedges because the street provided little else to hide behind. It never occurred to us to ask permission to use their front gardens, and probably no-one would have expected it.

The privet hedges got us pretty dirty and I, for one, got into a lot of trouble as a result - but I still did it.

Knocking Down Ginger was the name of the game in which we knocked on somebody's front door and ran away. Why the game amused us, I cannot now imagine, although it did. Neither do I know how it got such a strange name. 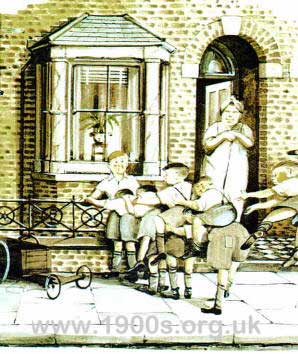 How to play 'Pie Crust Coming'

As the picture shows a team of boys holding onto one another with another boy rushing in to hold on, the game is clearly the same as my friends and I used to play in the 1930s. We called it 'Pie Crust Coming'. I don't know why.

The game is played with two teams: A boy in one team starts with his back to the wall and the next boy holds onto his belt or trousers with the rest of his team bent down and similarly holding on. Then, one by one, the boys in the other team pile on top and try to sway the first team to make it collapse. The game continues until one team collapses making them the losing team.

Another name for 'Pie Crust Coming'

My father (1917-2010) was brought up in the back streets of Belfast where street games were very common. He talked about a number of the games featured here and framed a print of one of them which he called 'Chuckie One Over'. It looks as if 'Pie Crust Coming' and 'Chuckie One Over' could be the same game.

In Sheffield in the 1950s we called this game 'Finger, Thumb or Rusty Bum'. When all the opposing team were on top of the bent-over boys, the person with his back to the wall, would hold a finger, a thumb or point backwards. Only the first bent-over boy could verify the truth of this as the opposing team had to guess which it was to go again.

If someone had a long enough length of rope it was fun to throw it over the crossbar of a lamp post. There is a photo of these crossbars in the section on cricket; the bar was where the lamplighter would lean his ladder.

Then we would take it in turns to hold both ends of the rope and swing from it.

One boy in our road had a hand-me-down bicycle. One day he asked me if I would like to have a go on it, and I jumped at the chance. Then, lo and behold my mother who had been out shopping, came down the road. The look on her face was enough. I could not get off that bike quickly enough, but I couldn't raise my leg over the boy's high crossbar without help. So I let the bike fall and me with it. I was called indoors and ticked off. My mother said, "Don't you let me see you do that again, you brazen hussy". I had no idea what a brazen hussy was. Years later I looked it up and found that brazen means, 'Unrestrained by convention or propriety' and a hussy is 'A pejorative term for a person who is deemed sexually promiscuous'. No such thoughts had entered my mind when I accepted the ride. I can only think that my knickers were showing because my skirt was pulled up by the crossbar.

One or more of us children would bend over and clutch our knees while the others would run and put their hands on our backs and jump over. Sometimes we would get a clout on the head if they missed.

My father also told me that, because no-one in the area could ever afford a proper football, they used to scrounge a pig's bladder from the local butcher, fill it with newspaper, tie it up and kick that about the streets!

We played two balls against the wall of our house until we were asked kindly not to as the elderly couple were fed up with the thump, thump in their living room!

Somewhat surprisingly my mother does not mention ball games of the sort that were thrown and caught 'by hand'. In my own childhood in the 1940s, such ball games were a common childhood pastime. In particular we played solo, bouncing balls against a wall. Vera Harding who lived on the same estate as my mother in the 1940s also mentioned 'two balls' a simple form of juggling, bouncing the balls against a wall - something I did frequently as a child in the 1940s and early 1950s.