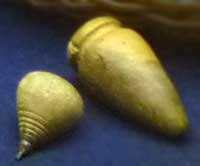 Wooden tops, photographed in Milton Keynes Museum. The peg top on the left clearly shows the metal peg at its bottom.

Children's toy tops were made out of wood in my Edwardian childhood. This meant that they were heavier than today's plastic versions, so would keep spinning for longer. They were variously known as peg tops, spinning tops or whipping tops. The name 'peg top' came from the small pointed metal pin or 'peg' at the bottom on which the top could spin.

Tops were used by both girls and boys, always in the street, there being little or no traffic.

Boys peg tops were made of ordinary wood about 2 inches long and about 1½ inches wide, and the sides were grooved.

To spin a peg top, a boy would have a length of string two or three ft long which he wound round the grooves. Then, keeping hold of the string, he would throw the top onto a flat surface - normally the pavement - with a brisk jerk. This sent the top spinning on its metal peg.

Boys competed with their friends for how long they could make their tops spin.

Girls' tops were smaller than boys' ones and often beautifully made out of boxwood. They were small and squat with only a small peg at the bottom. Often they were made in two colours, usually red and blue.

An unfortunate experience with a peg top

My brother Jim got into trouble one day with his top. For some reason the string clung to the bottom of the peg when he threw it. He swung around holding the string and then unfortunately he was only 1 ft away from somebody's house, and the top went straight into the person's front window, breaking the glass. The lady was most indignant.

Diabolo tops were small cylinders of wood with narrow necks half way up. They came with a long string, attached at each end to a stick as shown in the photo.

We would wind the string around the neck, then stoop on the ground and with one hand on the top, pull one of the sticks briskly and at the same time let go of the top. This set it spinning as we stood up.

Then, still standing, we would hold both sticks and move them to and fro to keep the top spinning between them.

A diabolo top with its sticks and string. If you look carefully you can see the neck half way up the top.

One of many shapes created with a diabolo.

Diabolos were fun because we could do so much with them. Depending on how we held and moved the sticks we could make the tops and strings make all sorts of shapes. We could compete for how long we could keep the diabolos in the air and for the range of tricks we could do with them.