Shadows: a traditional free indoor fun game for a group

The game and how it was played 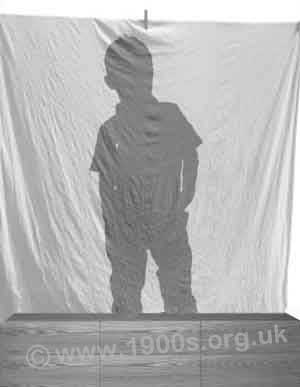 Guess whose shadow it is

The idea of this game was to cast individual's shadows onto a bedsheet and for everyone else in the room to guess whose shadow it was. It was best played with a fairly large group where most people knew everyone else's name, such as at a children's party.

This page describes how we played the game in my childhood, but there must be variations.

A game for older girls, boys and adults to play together.

• An old sheet, like from a bed
• Drawing pins or sticky tape or string and pegs to hold the sheet hanging vertically
• A moveable lamp
• pencil and paper for each player

It is essential to make some placement trials in advance. Be sure that the sheet is held up firmly and that the lamp is well positioned, etc. Depending on the layout of the room, the sheet may need to be positioned slantways across the doorway or some furniture so that everyone the audience can see it more or less front on.

How the game was set up

An old sheet was set up hanging vertically across a hallway door with a lamp illuminating it.

The group was divided into two teams. One team waited out of sight in the hallway while the other team sat in semi-darkness on the other side, armed with pencils and paper.

Someone was designated to be in charge and this person gave everyone in the hallway a number, but told them not to say their number until the end. This was so that the sitters inside the room would not recognise who they were from their voices.

One by one the individuals in the hallway walked across the doorway (or into the room if the sheet was positioned slantways), turned round and moved away again, while the person in charge shouted out their number. Everyone seated had to write down the number and the name of who they thought the shadow belonged to.

Only when everyone in the hall team had shown their shadow was the sheet moved to one side so that the whole group came together into the same room.

Then everyone in the shadow team announced their number and their name. The winner was the person who got most names right.

The game was then repeated with the team's roles reversed, so that everyone had a go at showing their own shadow and recognising the shadows of everyone else.


Why people enjoy the game

This game is enjoyable for several reasons. One is that it is surprisingly easy to put a name to a shadow, so most people will be winners or runners up. This makes for everyone to feel pleased with themselves. Also the game generates a lot of chatting as the names are revealed.

Another reason is that something will probably not go according to plan. Perhaps someone speaks so that they are recognised by their voice, or perhaps the sheet falls down. This leads to laughter and general amusement all round.

My enjoyment of this game comes from childhood family get-togethers. I would like others to enjoy it too. Hence this page.