Marbles: games children played years ago on the streets

It was the boys who played marbles on our streets in the early 20th century. If there was a manhole cover nearby, the dips in them were used as gullies. Girls never did play marbles. I don't know why.

How marbles used to be played in the streets

The boys would flip their marble with their first finger against their thumb and score if they got a marble into a manhole gully. I dread to think what their nails were like but hygiene was not so important then. 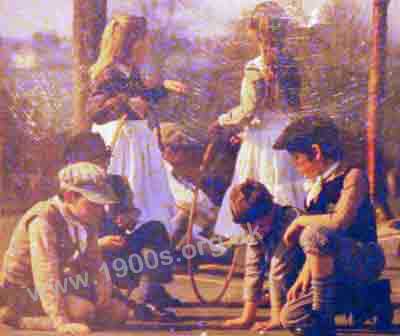 Detail from a picture on display at Blaise Castle House Museum in Bristol showing boys playing marbles in the foreground and girls with hoops in the background.

There were of course various games to play with marbles like rolling them down a slope or hitting an opponent's marbles off course.

Most boys owned their own collections of marbles, and they were proud of them.

The boys would swop among themselves to get a range of sizes and colours.

Marbles were made of glass with twisted colour markings inside. There were all sorts of colours and sizes. Some were very pretty. 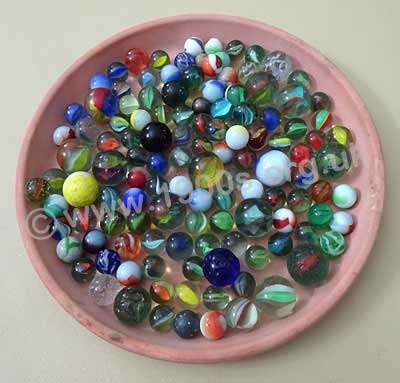 Marble collection showing the different sizes, colours and twists in the marbles.

When I got out my old marble collection, I was astounded to find that instead of the perfect spheres of my childhood memory they were quite mishapen and pitted due to having spent so much time jostling against each other in the trouser pockets of boys over an unknown number of years - much as pebbles get misshapen on the seashore. When I rolled them down a slope, I found that each had a different course. This would undoubtedly have added an element of chance into any game of 'glarnies' (another name for marbles). I was also surprised at how small my marbles were, many being only about half an inch in diameter.