Toys enjoyed by small children in the past

In ordinary families such as mine, it was the culture to pass toys (and clothes) on to the next generation - and I was fortunate to have older girl cousins. So my toys were hand-me-downs from them and from neighbours, and had been new or also hand-me-downs in the 1920s and 1930s. By this means I had a good collection of well-made toys that had been produced during the pre-war years. They may have come to me somewhat knocked about, but I never noticed. There were of course a few new toys bought by grandparents in the early months of the war when shops still had old stock.

My relatively abundant toy collection was in stark contrast that of my boy cousin who was born three years after me and who had no elder boy cousins. He told me that he had no toys at all. By then, the shops were empty of toys.

I had a china doll who I called Marigold because of her golden hair. Quality dolls were made of china then because there were no plastics, and china could be made to look like smooth, clear baby skin. 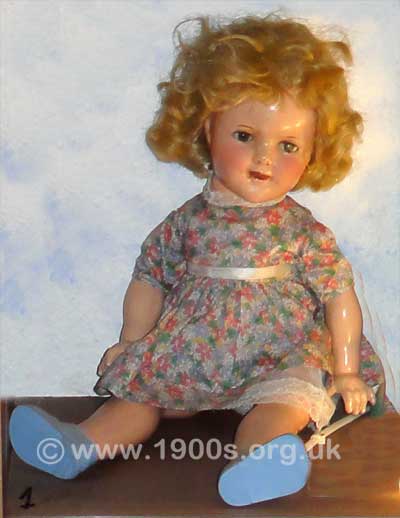 China doll, probably made before the Second World War in the 1930s. Photographed in Milton Keynes Museum.

Marigold was nearly as large as me when I first remember her, and was probably, like my teddy bear, bought new from 1930s stock. She was extremely well made. Her head, arms and legs were fitted into her body in such a way that they could all be moved separately. So she could sit up, lie down and hold out her arms. Her head housed some sort of mechanism that enabled her eyelids to open or close depending on whether she was sitting up or lying down, and if she was laid on her front and her tummy was squeezed slightly, another mechanism made her make a noise, which I suppose was supposed to be a burp.

Rosy cheeks, a rosebud mouth and eyebrows were painted onto her face. Her eyes were glass and large with real hair eyelashes, which I suppose must have been made of bristle because they were thick and straight. I don't know what her hair was made of, probably silk.

The trouble with china, though, was that it was brittle. Once Marigold was dropped, which was of course inevitable in the hands of a young child, bits of her broke off, and she lost the illusion of perfection. Eventually she became too broken to mend and was not passed on to anyone younger.

My earliest toy recollection is of my teddy bear who was as large as I was at the time. I suspect he was new, bought by a grandparent, just before the war started. I understand that he was made in Germany, not that that was ever mentioned in the war years. 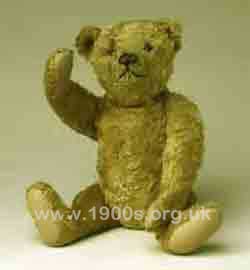 He had a yellowish fluffy fur, probably made of wool, realistic glass eyes, paws, and legs and arms which swivelled round so that he could sit up or lie down. He sat on the home-made stool in my bedroom when I wasn't playing with him, and it felt right to have him close at bedtime. I have no idea what he was stuffed with. By the time he had to be passed on, he was very thin indeed and balding badly. He also had replacement button eyes which changed his character completely.

I was thrilled to find the above picture from the Conservation Centre of Liverpool Museums because looking at their teddy bear was like meeting mine again. The picture is reproduced with their permission.

Like all children, I was given bricks to play with. They were wooden cubes, painted in bright colours. The paint was probably lead based which is now known to be poisonous, and the bricks probably went into my mouth. However, by the time they passed down to me, much of the paint had worn off. 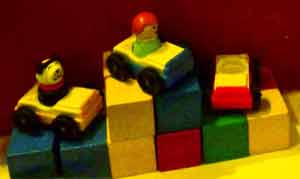 Dobbin the donkey was a great favourite of mine and I dragged him around a lot. He was small enough to be wheeled about the house without too much fear of knocking into things. 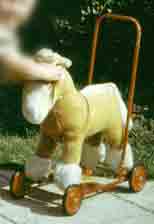 A 1960s Dobbin the donkey, practically identical to the 1940s version.

The photo is actually of my own children's 1960s Dobbin, but theirs and mine looked identical, even though theirs probably included man-made fibre, which mine of course did not.

My tricycle was a hand-me-down. Apart from the handle grips and pedals, it was made entirely of metal, there being no plastics. It had a fixed wheel, which meant that it only moved while the pedals were pushed round, and it no brakes. It wasn't designed to go fast. So really was a first toy rather than a mode of transport. 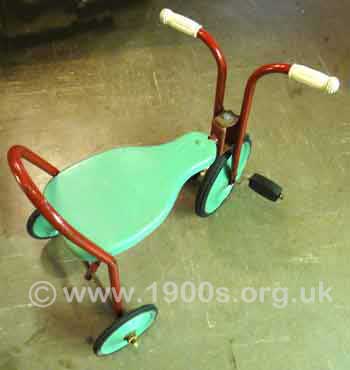 In practice, it got in the way of the adults, and all too easily knocked furniture.

I did a great deal of drawing and colouring. I was provided with paper and coloured pencils and, somewhat surprisingly, I don't remember ever being short of them. I have no idea where they came from. I never expected more than the basic colours. I never saw any colouring books, only scrap paper.

After the war, colouring books came back into the shops, but I was too old for them by then.