Boys and girls both used to play with hoops, but they had different types in my childhood, always in the street.

The boys had iron hoops. They would start the hoops with their hands then run with them, using a sort of rod with a loose closed hook attached to the hoop. This was used to keep the hoop trundling along. The photos show the rods. 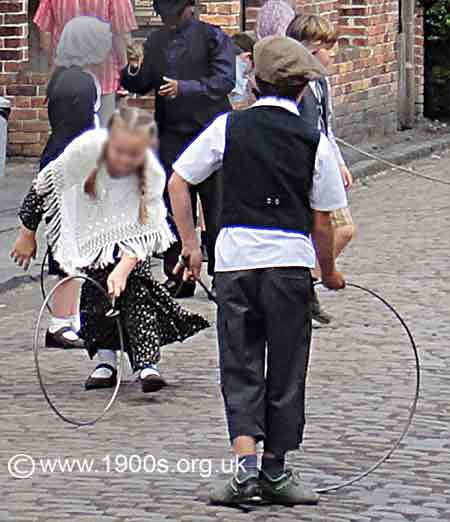 Left: This photo taken at the Black Country Museum photo shows the boys' metal hoops with their rods attached. However as it is a modern photo girls are playing with the hoops alongside boys whereas my mother clearly states that such hoops were only used by boys in her Edwardian childhood. Being a modern photo the girl's face has been blurred.

How to run with old metal hoops

The reason that the old iron hoops fall over when children play with them today is that they try to keep the rods on top of the hoops as they run.

A demonstration by a modern expert showed me that the way that works is to keep the rods as near to the ground as possible and move the hoop by pushing it. A photo shows this. 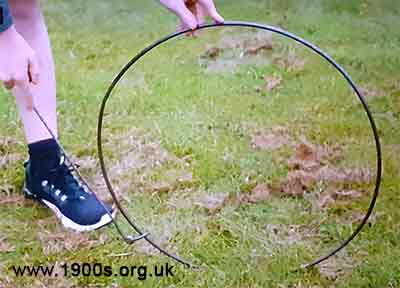 The first of the following three photos show an iron hoop hanging up in a museum, but it is unfortunately partially obscured by wooden stilts.

The second photo has the rod partially cropped away.

The third photo shows two iron hoops hanging up together along with other things which unfortunately detract from the hoops. 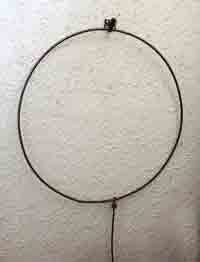 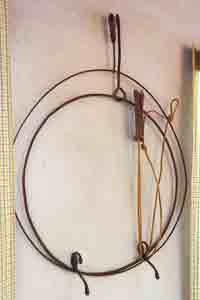 Three examples of iron hoops and rods, two from West Somerset Rural Life Museum and one from The Museum of Nottingham Life.

For girls there were wooden hoops in various sizes. We just called them hoops but I understand that their full name was hula hoops.

The girls placed the hoops round their waists and rotated the lower parts of their bodies to keep the hoops going. The winner was the girl who kept her hoop going longest.

The girls would also use their hands or sticks to beat the hoops along the pavement, with whoever kept the hoops going furthest being the winner.

The difference between the old wooden hoops and the hoops available today is their weight. The modern ones are light and it is almost impossible to keep them going round the waist. The heavier wooden ones could be kept going for almost as long as wanted.