This was a game for older girls, boys and adults to play together round a table. So the size of the table limited the numbers of players. A full pack of cards was needed for each player. We kept old, battered packs specially for Blob Eye because it was a game of speed which rapidly damaged the cards, making them effectively 'marked' for most card-playing purposes. If you don't have any yourself, an older family member or a charity shop should oblige.

A game for older girls, boys and adults to play together.

• Old pack of cards for each player, shuffled
• Chairs and a table to sit round suitable for three to eight or so players per table


How the game was played

The game started with everyone making sure that their packs of cards were fully shuffled. Then they had to flip through their packs, three cards at a time to find an ace. In our family, flipping through one at a time would have been regarded as cheating. I don't know why, and you may prefer to play by different rules.

The first person to find an ace quickly banged it down face up somewhere towards the middle of the table.

Everyone now had two tasks: to find an ace in their own pack to bang down and to find the card with the next number in a suit already on the table.

Once a suit was completed with a King, the player placing it had to put the it face down to indicate that that pile was no longer playable.

The aim was to get rid of all one's cards by placing them in order on the appropriate pile. This activity led to frantic too-ing and fro-ing of arms as players rapidly banged down cards onto suits across the table. It was no wonder the cards got damaged!

The game could finish with the winner or it could continue with the remaining players until everyone was out of cards. 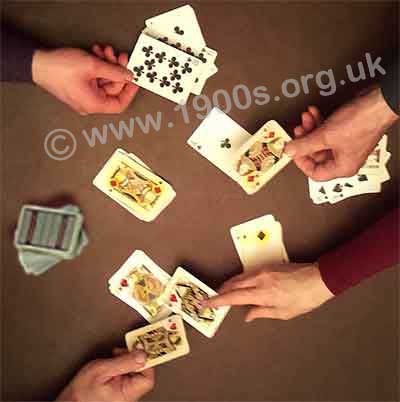 A mock-up to illustrate the game. In so doing it does not do justice to the game's speed and the flaying of arms.

Player on the left bangs down his/her 10 of Clubs on the 9 of Clubs pile.

Player on the far-right rushes towards the Jack of Diamonds to be the first to place a 10 Queen of Diamonds onto it.

Two players compete with their Queens of Hearts to put their card on the Jack of Hearts. (This is how cards get damaged!)

On the left is a completed pile of mixed packs, same suit, with the top card, the King, turned face down to show that the pile is complete.

A lone Ace of Clubs is waiting for someone to put a 2 of Clubs onto it.

After the game, came the task of returning the cards to their original packs with the same back in each pack.

Why the name 'Blob eye'

Why the game was called Blob Eye is lost in the mists of time in my mother's family, although presumably it had something to do with players' eyes needing to dart around quickly.

My enjoyment of this game comes from childhood family get-togethers. I would like others to enjoy it too. Hence this page. I just hope that computer games have not replaced real playing cards completely. If so and if you can think of a readily available alternative, please let us know.