The arrival of a coal delivery early-mid 20th century

When I was a child on a typical housing estate in the early 1900s, coal fires were our only means of heating rooms, heating hot water and cooking. So coal was an essential item and was delivered to the house on a regular basis. (The same was true in some areas up to the 1950s.)

The coalman's horse and cart

The coal was delivered by a coalman from a horse and cart.

The cart was a flat platform with removable metal railings round it to keep the sacks of coal in place. The sacks were packed in cwts (hundredweights). [One cwt is just over 50 kg]. 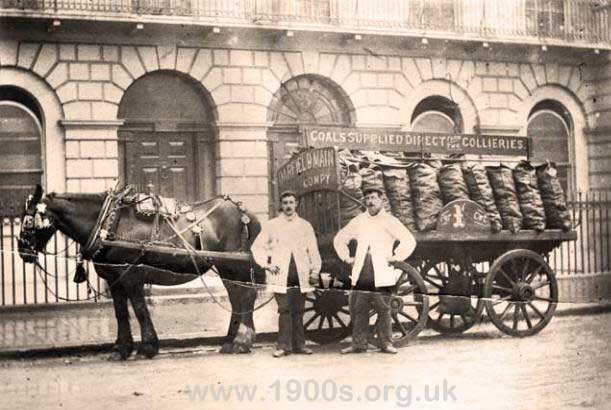 An early 1900s horse-drawn coal delivery cart showing its open sides loaded with sacks of coal. The photo is courtesy of Gillian Smyth and shows James Smyth with one of his brothers. The Smyth family lived in Edmonton at one time.

The placard at the top of the cart reads: COALS SUPPLIED DIRECT FROM THE COLLIERIES; the one at the front reads DARFIELD MAIN COAL COMPANY; and the one at the side reads 1/- [one shilling] per cwt.

The page on the coalmen's clothes explains the white coats which might at first seem surprising for anyone working with coal. Apparently the two brothers in the photo either worked in the coal office or drove the delivery cart. Actual delivery men were not in the photo.

As the coalman left, my mother would always tip him two pennies which was a lot of money in those days. It was expected and was presumably so that he would remember to be careful not to touch the walls or knock anything over next time. Afterwards he would respectfully touch his hat in acknowledgement.

This early 1900s photo of a similar open-sided coal delivery cart is courtesy of Moyra Hill.

Magnification too large for the web page shows that the writing on the end of the cart states Thomas Spivey as the proprietor. It could also say 1/- a cwt, like the other cart, but this can't quite be made out.

The larger original photo, of which this is a detail, shows a set of cottages in Yorkshire occupied by the Spivey family and known as Post Office Row. There is a placard on one of them stating Spivey Grocer. 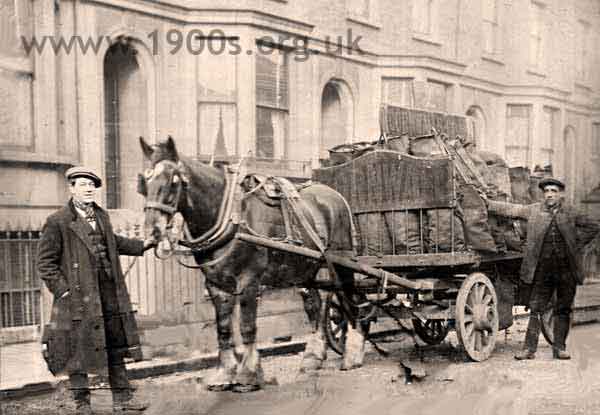 Our coal was delivered to coal bunkers outside the house, and my mother, who never trusted the coalmen, always had my sister and me stand outside and count the sacks as they were delivered.