Each coal yard probably delivered to quite a large area. 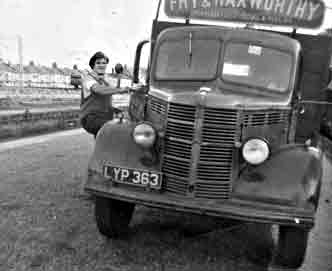 A coal delivery by lorry. Photo courtesy of Terry Martinelli.

My recollections of our coal deliveries were of motorised lorries, although horse and cart deliveries were still in operation elsewhere. The coalmen themselves looked just like my mother's description of coalmen in the early 1900s.

Coalmen could be recognised anywhere, with their faces black with coal dust and their special hats with the wide strip of leather hanging down behind to protect their backs as they lugged the bags of coal.

Our coal was delivered down the shared sideway of our semi-detached house and heaved into a brick-built bunker in the garden. This was built by my father, who was no handyman, and it was very ugly. Fortunately it was out of sight of the house.

How the public spoke to delivery men

Interestingly my mother always addressed the coalman as "Coalman, ..." In fact she addressed all delivering tradesmen according to what they were delivering, something that has died out in recent years. It would be:

"Coalman, are you bringing my coal or coke order?"

"Milkman, can I have an extra pint please?"

I suppose it must have been something that she got from her mother, which was probably common practice in the early 1900s.

My father was a coalman up until the early 1970s - and he was known as a coalman all over the city of Liverpool where we lived. Yet on formal documents, his occupation was always written as a 'coal porter'.

[According to former coalman, Bob Warr, coalmen were also referred to as 'coalies'.]

In the 1940s and 50s we lived in a flat on the fourth floor in Notting Hill, London, on a council estate. There was no lift, so everything had to be humped up and down the stairs. We had to tip coalmen a shilling to carry a cwt (hundredweight) of coal up the four floors. Otherwise they would not come to us next time round.

A shilling was quite a lot of money. Even in real terms it was probably much more that my grandmother had to tip the coalman in the first part of the 20th century.

Coal delivery over the years

Even as late as the 1950s, the coalman delivered to our streets in Edmonton much as he had done in my parents' and grandparents' time. He arrived by horse and cart, and carried the huge sacks of coal right through the house. Then he emptied them into the cupboard under the stairs - which was where coal was stored in the terraced houses where I was living.