The dress code for coalmen

The form of dress for coal delivery men, as described in the boxes, is exactly as I remember in the mid 20th century.

I have checked out this dress code with a number of people who remember coal deliveries and - so far - everyone in the south east of England and as far north as Cambridge remembers it.

However, small local businesses elsewhere in the country may have worn different clothes, probably on an ad hoc basis.

Although 'coalies' - as we called them - did not have a uniform, they did have a dress code because they were dealing with the public and uniformity was quite essential. 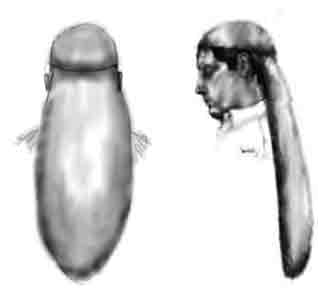 Back and side view of a coalman's backing hat, based on a sketch by former London coalman, Terry Martinelli.

The piece of leather at the back of a hats was mainly used for protection by the loaders who carried the sacks of coal on their shoulders and backs. It was called a 'backing hat' and was made from an old trilby hat, the front rim of which was cut away. Stitched to it, using hemp or jute twine, was an old piece of thick leather from an old sewer boot, split up the seam. It was generally made by retired coalmen for some pocket money.

White coats - 'backing jackets' as we called them - were for car men, i.e. the men who drove the carts, and white smocks were for the depot manager. These were traditionally worn from the 1st May, the start of summer prices which were less than those in winter. 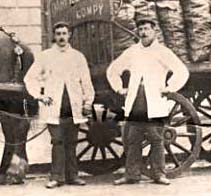 The white coats and 'spankers' worn by managers and drivers

The spankers, i.e. the straps round the trouser legs

The straps around the trouser legs were called 'spankers', the use of which I am not too sure. It was possibly to stop dust rising up the legs in hot dry weather or wet conditions. Or maybe it was to stop vermin from flying up legs, particularly with people who worked in grain stores. However my theory is fashion and of course that dress code.

When the coalman came to our house to deliver coal, his face, hands and clothes would be black with coal dust.

He didn't have a uniform, but wore a leather hat with a flat leather flap down the back to protect his neck, back and shoulders as he carried the sacks.

He also wore narrow straps just below his knees, possibly to prevent the coal dust getting up his legs, but I'm not really sure why. The trousers always seemed to be corduroy but that may have been chance.


The smell of a coalman

My grandfather used to work in the coal yards at Upper Holloway, in north London where he unloaded the coal trucks and loaded the lorries. What I remember particularly is the smell of the coal when he came back home in his working clothes. There was a nightly ritual of him standing at the sink in the kitchen for a through wash. Afterwards my nan would dish up his dinner.

The scariness of coalmen to young children

To my sister and me, coalmen seemed scary because they were 'as black as the ace of spades' from all the coal dust, but often with paler rings round their eyes where they had tried to rub the coal dust away.

At the weekend we children thought we had two fathers - a dusty black coalman Dad throughout the week and a clean washed off-duty Dad at the weekend!


Other ways that coalmen protected their backs

As a child in Yorkshire, I remember coalmen making deliveries wearing thick leather sleeveless jackets to give protection to their shoulders and backs when carrying bags of coal. 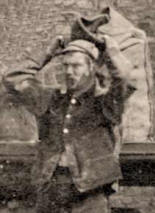 
In Poulton-le-Fylde in Lancashire where I lived as a child in the 1930s and 1940s, the coal delivery men always wore a sort of 'leather shield' as protection. I can best describe it as like the back half of a tabard. It had straps over the shoulders and round the chest to hold it in place. One of my grandsons thinks it may have been called a 'back skin'. Can anyone shed more light on its name?


My father and his fellow coalmen never had the protective head, neck and upper back gear which seems to have been common further south.

He had some protection on his back which was a piece of waterproof black leather or leatherette fabric stitched onto the upper back of his donkey jacket*. The waterproof backing did repel the rain initially, but it would eventually deteriorate due to wear and tear of the heavy coal bags. So he would arrive home with his back soaking wet from the holes in the back of the jacket. Although its fabric was a thick black industrial woollen material which was warm, it was not suitable for wet weather conditions.

My father wore a leather topped cap, similar to New York policemen in the 1960s, but there was no covering of his neck.

* A donkey jacket is a medium-length workwear jacket, typically made of unlined black or dark blue thick woollen fabric, with the shoulders back and front reinforced and protected from rain with leather panels or [in more recent years] PVC panels.