Receipts for coal and coke

Coal and coke were the only means of heating in early-mid 20th century Britain. Although gas fires did exist in the main bedrooms of some of the more modern houses of the time, it was considered extravagent to turn them on.

Receipts for delivery of coal and coke from my father's effects tell us about the prices of coal and the costs of heating a standard three-bedroomed house in 1938 and early 1939.

The receipts also starkly illustrate inflation and tell us something about how people lived at the time. 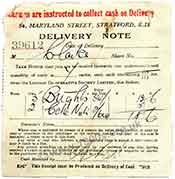 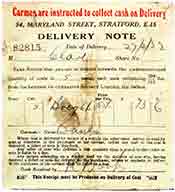 The receipts are from the London Co-operative society, the 'Co-op', which is just one further piece of evidence that Co-ops were involved in a wide range of commerce at this time.

The Co-op, which issued the document to my parents, traded coal through its head office in London, although during the Second World War my parents were registered with the local coal yard.

Although the first receipt is undated, the evidence for the 1938 date is that the similar second receipt is dated February 1939 and shows a later order number and a higher price/ton. It is important to note that the 1939 receipt was from before the start of the Second World War in September. This meant that it still reflected normality.

The receipts show purchases of 'Brights' and coke nuts. 'Brights' was short for 'Derby Brights'. The coal would have been for the living room fire and and the coke for the boiler which provided the hot water and in so doing kept the kitchen and bathroom warm.

Prices of coal and inflation

How's that for inflation!

How the coal and coke were packed

The receipts show that the coal and coke were packed in sacks of one hundredweight. Presumably everyone was familiar with this pre-decimal measure of weight, yet the receipts conveniently confirm that each sack contained 112 lb (pounds). These sacks were heavy and black with coal dust. There are pictures of the coal sacks on other pages.

Were servants the norm?

There is reference to a servant in the small print of the above invoices, as if one were commonplace. How's that for how life has changed!

These receipts were of course from just before the Second World War - the war that changed so much. I doubt if servants would be assumed after the war.