When gas fires were built into rooms of houses

Gas fires had to be 'plumbed in', so only the newer houses had them when I was a child in the 1940s. I grew up in a house that had been built about 1937, just before World War Two, and it had gas fires in two of the bedrooms. 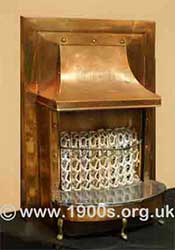 A domestic gas fire. This fire in Milestones Museum, Basingstoke, was not piped into a chimney, as it would have been in its original use - albeit that the chimney could have been hidden in the wall. With its brass surround, this gas fire is more elegant than the gas fires in my home which had a cream Bakelite surround.

The third bedroom, the hall, landing and lavatory had no form of heating, but the bathroom benefited from the warmth of the airing cupboard and being above the boiler in the kitchen. The sitting room and dining room had grates for coal fires - but coal fires were only lit when my father was at home. Fortunately the kitchen with its boiler was always warm.

How gas fires were lit

Gas fires had to be lit carefully. We had to turn on the gas tap alongside the fire, wait a moment for the gas to come through and then light it with a match or taper. If the gas was left too long before lighting, it made a rather frightening bang which could singe or burn. If it wasn't lit at all, it would be dangerous because the gas, at that time, being coal gas, was poisonous.

Gas fires worked by heating the white ceramic open-patterned pillars shown in the photo. These became red hot and radiated heat out into the rooms.

These pillars used to be called elements but as their design changed over time, they became known as radiants. Elements were extremely brittle and could be damaged just by poking with a finger. They could be replaced from hardware shops, but invariably the patterns and heights were different. It was common to see such gas fires with one or more non-matching elements.

It was rare for us ordinary folk to use the gas fires. In very cold weather my mother lit them shortly before bedtime, but heating was considered wasteful and they were never given time to heat the room properly. Anyway, the pressure was often too low to do much good, because of the austerity of the war years and their aftermath. I have clear memories of ice on the inside of my bedroom windows.

Even in the late 1950s when I was at university, living in a hall of residence that was a renovated old house with gas fires, it was against the rules to have the gas fires on before 2.00pm. There was no other form of heating; it was very cold in winter, but we survived.

Like coal fires and paraffin heaters, gas fires used the oxygen in the air to burn which made people feel drowsy.

Shilling in the slot gas meters and safety

Fortunately for my family at home and for us in halls of residence the gas was on tap, ie we only had to turn on the tap for the gas to come through. Friends in lodgings had a gas meter, which needed to be fed with shillings. 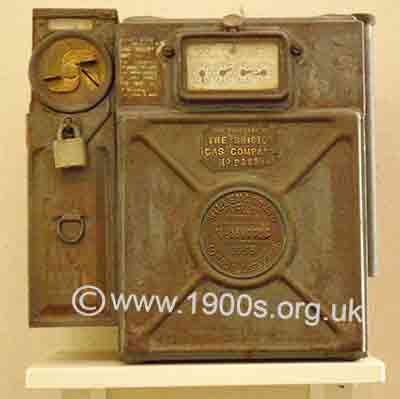 A 'shilling in the slot' gas meter. The coins went in one of the slots on the left hand side and the dials showed how much gas was left to use. Photographed in Blaise Castle Museum.

These old style meters could be dangerous because when the gas ran out the fire went out. If later, someone put another shilling in the meter, the gas started flowing again, and being poisonous, it could kill. Later gas fires had a safety device which cut off gas if the ceramic elements were not being heated.