Oil heaters which burnt paraffin were extremely popular in the past. In fact my grandmother always called the ironmongers / hardware shop the 'oil shop' as oil was its most common sale. There were of course no retail parks of large shops, so people had to go to a range of different shops to buy everything they wanted. 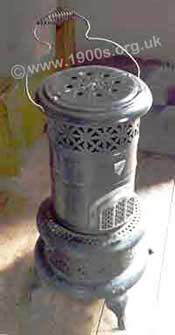 The most common form of oil heater / paraffin stove

Oil heaters had obvious advantages: They were portable, and 'portable heaters' was an alternative name for them. Unlike coal fires and electric fires they didn't need a chimney or an electric socket. Also paraffin oil was relatively cheap.

The disadvantages were less immediately obvious but perhaps more significant, as explained in the next section.


A personal experience of the emissions from paraffin heaters

In our bathroom we had a paraffin heater which we would light for about 10 minutes before starting to run a bath, and it would stay lit - unvented - until the last bath of the household was finished. How we never succumbed to carbon-monoxide poisoning is a complete mystery to me in retrospect, but we didn't know it was dangerous back then!

As a child my parents took me to visit a very old man who had no modern conveniences. All his lights were gas lamps and his heating was with oil heaters. The small from the oil heaters permeated all over the house, even in summer.

Oil heater were the obvious choice to keep the frost out of greenhouses in the depths of winter.

In the 1950s we had a paraffin heater in the shape of a radiator. At the time, I thought this most luxurious as the homes of ordinary people did not have central heating.

Photograph by the webmaster in Fagans Museum of Welsh Life.