In the 1940s and into the 1950s when I was growing up, power cuts were not the only reason why electrical equipment suddenly stopped working. The other reason was that a fuse had blown to interrupt the elecrical connection. These fuses were not inside the old electric plugs attached to the equipment, as in later years. They were in a central fuse box - see below. First, though, the fuses themselves:

A fuse wire was a short length of wire with a diameter and composition such that it melted when a current surge though it became too great. This broke the circuit so that everything plugged into that circuit suddenly stopped working.

In the early days, fuse wires were sold by hardware shops in lengths wrapped round cardboard as shown in the following photos. There would be several different wire thicknesses wound separately round the card and marked according to the current at which they would fail, typically 5, 10 and 15 amps.

Examples of fuse wire, as sold in shops: 5 amp for lighting and thicker 15 amp for heating.

When electrical equipment is manufactured, the current it needs to work is part of the design specification. A safe assumption is that if the current drawn by equipment goes well outside the design value, something is wrong and so for safety reasons the current should be cut off. This is precisely what a fuse is used for.

Holders for fuses came with different designs. The part that held the fuse wire was normally ceramic with a narrow window to show at a glance whether the fuse had melted. The containing box was probably Bakelite.

Holder for a fuse wire showing the fuse wire through the glass window. This window was to show whether or not the fuse had melted.

The function of the parts is best explained below in the section on replacing a blown fuse, but first the fuse box.

All the fuses for a house were in a box called a fuse box which was situated where the electric power came into the house. Ours was in the cupboard under the stairs in the hall. There was one fuse for each circuit and there were probably several sockets or devices on any one circuit. 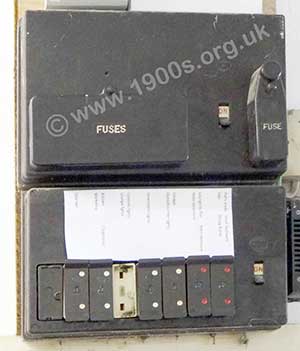 A fuse box. Note the labelling to indicate which fuse protects which part of the house. One fuse holder has been removed to show how the fuse holders plug into the box.

A pack of fuse wire was always kept ready for use on top of the fuse box together with a torch.

When a few blew, a new fuse wire had to be inserted in the appropriate fuse holder. This was usually the task of the man of the house, as it was generally considered too small a job for an electrician. Every man I ever knew was proficient at it. He understood about the correct fuse wire to use for a particular circuit, where the fuse box was in the house, how to replace the fuse wire in the old blown fuse holder. Essentially, he knew where the mains switch was and the importance of turning it off as a first step to changing the fuse. Tampering with electric circuits while they carried electricity meant a dangerous shock.

The first step was to pull out the fuse holder from the fuse box and then loosen the screws each end to allow the remains of the old fuse to be pulled out. Then a length of new fuse was passed down the ceramic tube and clamped at each end. The fuse holder was then replaced in the fuse box. Finally the electricity was turned on at the mains - with fingers crossed that the new fuse didn't blow.

Typically in old houses there were wiring for lights and wiring for power devices. Sometimes all the house lighting would be on just a couple of 5 amp fuses. The assumption was that the maximum current that the lighting on any one circuit would take would be less than 5 amps. The old lighting used to use light bulbs with a coil of thin wire inside that glowed brightly. Frequently when these light bulbs were knocked then the thin wire inside broke, the light went out and not infrequently the broken wire fell in such a way as to cause a surge in current that then blew the fuse. If there was more than one light bulb connected to the same fuse then all the other lights went out at the same time. So one light bulb failing could cause all the lighting to go out. People would keep candles or a torch in a special location ready for such a situation.

If a fuse kept blowing, it meant either that something more serious was wrong with a piece of equipment on that circuit or that the total number of light bulbs or whatever equipment was too close to the limit.

Why fuses blew when equipment was first turned on

When motors were first turned on, they tended to take a larger current than when they were running. So that was when fuses would blow. As young boys, my friend and I used to turn on our motor without its belt on, so that the load was less and it took less current. Then the fuse didn't blow. When the motor was fully up and running, we would put the belt back. A dangerous procedure that is not to be recommended!

In the 1950s, there was a regulation that every piece of equipment must have a plug with its own fuse. The plugs were called 13 amp plugs, although they were often fitted with fuses of other sizes, depending on the power rating of the equipment. 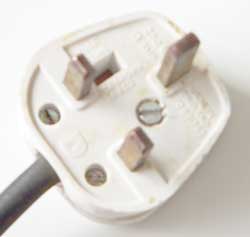 13 amp plug wired onto a cable.

For some years, electrical equipment had been sold without a plug. So the new-style plugs had to be bought separately. A rough and ready check for someone's general competence was whether they could 'wire a plug' with the correct coloured wires going to the correct contacts and with the correct fuse.

A correctly wired plug is shown below. 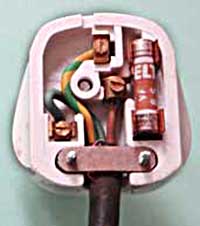 Inside a 13 amp plug showing its wiring

Later on, much equipment was sold with its cable moulded onto the appropriately wired plug. 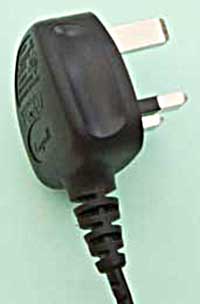 Newer 13 amp plug with cable and plug moulded together