In the 1940s and early 1950s my mother used an electric iron, which was a far cry from the old flat irons that she had been used to before she was married, which had to be heated on the kitchen range. This iron, which is shown in the photo was not thermostated. She had to keep testing it in the time-honoured way of dabbing it with a licked finger and judging its temperature from the sound it made. 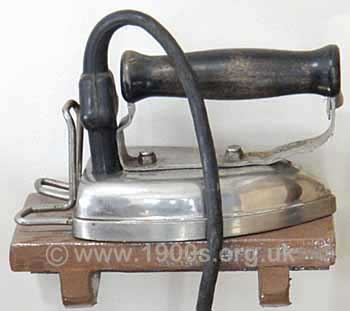 Neither was there any mechanism for damping the clothes. So again, my mother had to use the time-honoured way of bringing in the clothes from the line at the point when they were not quite dry and rolling them up to keep that moisture in.

The flex was coated with rubber.

The electricity supply for the iron

These electric irons were not plugged into wall sockets, but into the ceiling socket of the light bulb. The photo shows one of the special adapters which enabled that a light bulb to receive power from one side and the iron (or other electrical device) from the other. 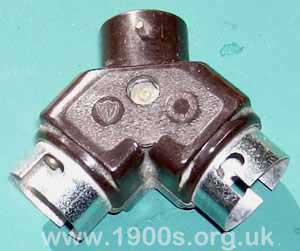 Early ceiling adapter to take an electric iron as well as a light bulb. Photo courtesy of Desmond Dyer

This arrangement often lead to fuses blowing due to overloading the electric system. It did, though, have the advantage that it kept the lead well out of the way of the iron and the clothes.

I only have a vague memory of the ceiling adapter, as later on the irons were fitted with the round pin wall plug that fitted into wall sockets. 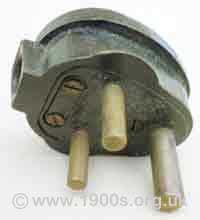 Round pin electric plug for a wall socket, found in my mother's effects

At that time, no electrical devices were sold with plugs attached. Everyone had to buy plugs separately and fit them themselves.

Ironing boards had wooden frames - not that my mother ever possessed such a thing. Like her mother before her, she used an old blanket, folded to pad it out, with an old sheet on top, on the kitchen table. 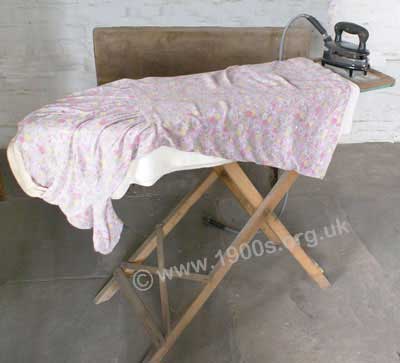 Ironing board on a wooden frame. Photographed at Fagans Museum of Welsh Life

My mother used a clothes horse to hang the ironed clothes over for airing. It folded flat for storage and also had a wooden frame. 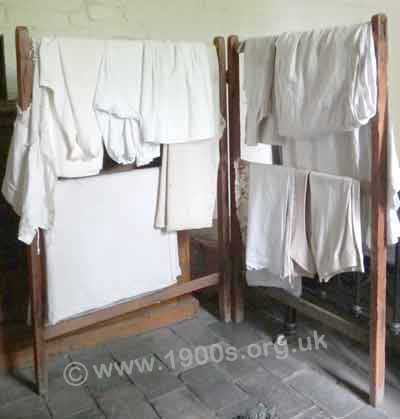 Clothes horse on a wooden frame. Photographed at the Black Country Museum