This page shows early electric equipment used in food preparation. They were within the price range of most ordinary households in the mid 1900s, but few would have bought them at that time because they would have been suspicious of new technology. My husband's family were ahead of most families in this connection, and my understanding of the equipment comes from them. 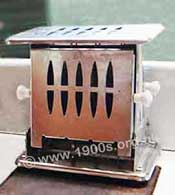 Early electric toaster which toasted two slices of bread. Doors at the front and back opened downwards to take the slices. Then the doors were closed to bring the slices close to an electrically heated element 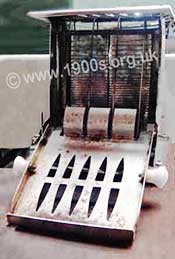 These toasters had a wire heating filament wrapped around a sheet of mica. The design was very ingenious. On lowering the door with the insulated handle, the slice of bread was automatically flipped over so that the reverse side was toasted. By keeping a wary eye on progress, the degree of browning could be chosen to perfection.


Vintage electric tea-making machine on a timer - the 'Teasmade'

A 'Teasmade' enabled people to wake up in the morning to a hot cup of tea. Every evening, clean cups and milk were brought into the bedroom, tea leaves were put into the teapot (back right in the photo) and the kettle (back left) was filled with water. The alarm was set to heat the water at a set time in the morning. 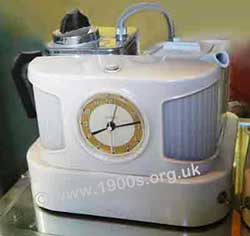 Teasmade, photographed in the Bakelite Museum

When the water boiled, the steam pushed the hot water into the teapot.

People had to pour the freshly made tea into the cups themselves.

It was a noisy system which probably woke people up when the tea was ready, but there may have been a separate alarm. Do you know? Do you also know if the alarm turned on the lights at the side.

There were various versions of Teasmade, but this is the one my husband remembers.