When electricity started being used for heating houses

These types of electric fire became widely available in the 1950s. They were popular because they could be moved from room to room, wherever there was an electric socket, whereas the earlier gas fires could not. 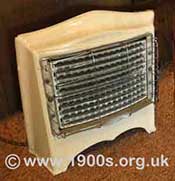 However, because gas fires worked by radiating heat out into the room, it was important to position them carefully, as they could scorch anything too near. They could also be knocked over and cause a fire.

I don't remember fan heaters until the 1960s, although they may have existed before. They were welcome in that they produced instant heat and warmed the air, rather than things in the room which in turn warmed the air. However, they were noisy, relatively expensive to run and one noticed the difference immediately when they were turned off.

Advantages and disadvantages of heating by electricity

Electric fires could warm a room nicely if put on well in advance, and they didn't cause drowsiness like paraffin heaters and coal and gas fires because nothing was burning to use up the oxygen in the air. If they were rated at the magic 3 kw (kilowatts) they could even make a room too warm, but the moment they were turned off, it felt cold, irrespective of what the actual temperature was because of the sudden cut-off of the radiant heat.

Electric fires did not cause condensation and were very drying. Although this was useful for drying wet washing in bad weather, the dry air, particularly when combined with radiant heat, made one's skin very dry and itchy.

Nowadays of course heating by electricity is very much in favour because it does not directly produce greenhouse gases - indirectly is another matter. Before the later years of the 20th Century, though, no-one gave a second thought to such things as global warming was not an issue.