Ironing the laundry before electric irons

Ironing Monday's laundry, was always a task for Tuesdays when I was growing up in the early 1900s. It was almost certainly the same in Victorian times and continued in some households at least into the 1950s.

Like most women in the early part of the twentieth century, my mother was always very particular about the appearance of her finished weekly wash. This meant that it didn't only have to be clean; it also had to be free of creases. So everything had to be ironed. But there were no electric irons, steam irons or crease-resistant fabrics to made her work easier.

Fortunately, though, if the weather on washday had been windy and sunny some of the creases would have blown out while outside on the clothes line. The mangling helped too, as did the careful folding.

The right dampness for ironing

So the washing was always carefully folded and rolled up on Mondays, so that the dampness would spread evenly through it by the next day. If my mother thought that the washing might be too dry, she would 'damp it down' by sprinkling it all with water before rolling it up. 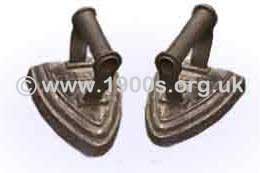 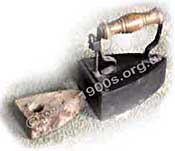 A box iron with one of its slugs

The irons were made of cast iron, and there were two sorts which needed to be heated differently.

One sort was known as a 'flat iron' and, as its name implies, it was not deep - see the first of the pictures. Flat irons came in pairs, so that one could be in use while the other was heating up.

The other sort of iron was known as a 'box iron' because it was hollow - see the second of the pictures. Inside was a specially shaped piece of clay, which was known as a 'slug' which supplied the heat. There was always a pair of slugs, so that one could be in use while the other was heating up. 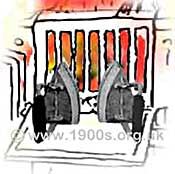 Two flat irons heating up with their faces close against the hot coals of the kitchen range fire. Once ironing began, one iron would be in use while the other was heating. Woman testing the temperature of an iron by holding it up to her cheek. Edited detail of a screen shot from an old film

Flat irons had to be heated on the kitchen range by placing their flat faces close up against the bars, as shown in the picture.

Box irons got their heat from the slug which was put right into the fire to heat it. Once it was hot, it was removed with a specially shaped long hook and placed inside the iron.

Testing the temperature of the irons

There were of course no thermostats for these irons. My mother would test the temperature, either by putting it close to her cheek or by licking her finger and touching the hot surface to see how quickly it went "psh" as the wet from her finger evaporated.

Fortunately as the items for ironing were all natural fibres, they did not sizzle and melt at relatively low heat temperatures, but they could still scorch if the irons were too hot.

The ironing board: the kitchen table

My mother, like all the other women I knew, always did her ironing on the table in the kitchen. The full width of the table was particularly useful for ironing sheets and table cloths.

My mother protected the table with an old blanket folded into several layers with an old sheet on top, kept specially for ironing.

Stand for a flat iron, photographed in Tredegar House.

Stand for a flat iron, photographed in Milestones Museum.

As the whole of the iron got heated, not just the bottom surface, it had to be placed where it couldn't cause burning while the clothes etc were being positioned. My mother always used a bar of Sunlight soap which she placed the iron on. The soap apparently made the iron glide more easily while also keeping the intense heat of the iron off the old sheet.

There were of course proper iron stands, as shown in photos, but the Sunlight soap served its purpose well.

As the irons got really hot, the iron handles did too. So a cloth had to be wrapped round the handles while the irons were used.

Wooden handles did not get hot so quickly, but a cloth was still useful to wipe away any soot that found its way onto the iron from the burning coals.

In the summer, after the washing had been ironed, it would be put out into the garden again to air, and the smell that came from it was wonderful. It was really lovely to get into bed between clean sheets that had been washed at home and dried outside in the sun and wind.

In the cold and damp of winter, the ironing would be aired indoors, in the same way as the washing was dried in bad weather.

Ironing was hot work, because the kitchen range had to be kept hot enough to heat the irons. It was also steamy work which made it all the more exhausting, and there was a lot of it because there were no crease-resistant fabrics.

So although Tuesday's ironing was probably not as tiring as Monday's washdays, my mother still couldn't manage to do cooking. So Tuesday dinner [lunch] saw the last of the Sunday roast in the form of cold meat, with mustard pickle and bubble and squeak made from Sunday's vegetables.