The Flatley: an early home electric dryer for the washing

Why Flatley dryers were so popular

For drying and airing our wet washing in the early 1960s, we had a Flatley.

The Flatley was a very popular piece of electrical equipment because few families back in the 1950s and 1960s had radiators to dry wet washing on. Fewer still had tumble driers, and although it was possible to dry washing at the laundrette, it involved the delay of waiting around and extra cost.

Description of a Flatley dryer and how it was used 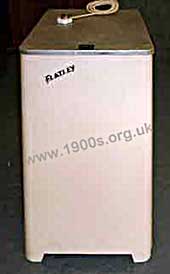 The Flatley clothes dryer and airer 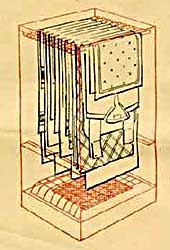 Schematic diagram of inside a Flatley, detail from the sales brochure


From the outside, the Flatley was simply a free-standing white cabinet with a metal lid.

Inside it had an open heating element at the bottom which consisted of zig-zags of coiled wire, and at the top were removable wooden slats. Damp clothes were placed over these slats and the Flatley, with its lid still off, was plugged into the electrical supply for as long as it took for the clothes to dry.

The brochure consisted of a front cover, a page describing and illustrating the features, a page illustrating the Flatley exhibit at a major publicity show and a page of technical text. The first three of these are shown in the following images. Do tap/click to open them up as they give a great deal of information about the Flatley. 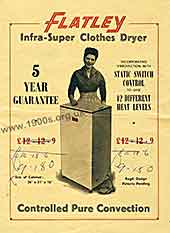 Front cover of a brochure for the Flatley airer/dryer 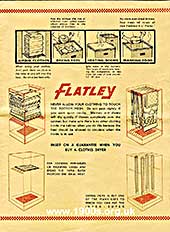 Page of the Flatley brochure showing its selling points


The page stated that an official census revealed that the Flatley Infra-Super - a superior model to the one that I had - was mentioned either first or second by every visitor who was asked for his or her views on the most interesting feature on show.

Costs of a Flatley

The front cover of the brochure clearly shows that the anticipated price of a Flatley in the UK was £12-12-9. This was of course in the old pre-decimal money and was equivalent to just over £12.50 in current money. There is no way that such equipment could sell at a similarly low price today - just another of the many indicators of inflation on this website!

The definitive price suggests that this brochure was printed during the period of Retail Price Maintenance, i.e. of fixed prices for identical items in all shops - a feature of the rationing of the Second World War. Retail Price Maintenance ended as late as 1964, so allowing competition between retailers who reduced their prices to attract custom. In fact the date on the back page is 1958.

The scribbled prices show that the retailer reduced his price several times, firstly to £10-18-6 and then to £9-18-0 and finally to £9.15.0. So he was still using the same brochure after 1964, i.e. after Retail Price Maintenance was abolished.

My family had a Flatley when I was a child in the early 1960s. I seem to remember that it was expensive to run because it ran on electricity, and Mum only really used it to quickly dry off things like underwear and shirts.

The brochure suggests all sorts of uses for the Flatley most of which my husband and I had no idea of when we were using our Flatley.They include airing clothes, drying pots, heating rooms, warming food, cooking meringues and drying film. If you tap/click the second of the above brochure images, you will get the idea.

I must admit that even if we had had known about these alternative uses, I doubt we would have put them to use. Our Flatley was more basic than the one shown in the brochure and it did not have the protective grid on the base. Hanging anything inside that might have fallen onto the heater was extremely dangerous. So we loaded the Flatley carefully and never left it unattended.

The other listed features of cooking meringues and drying films would have seemed good ideas, but drippings of the meringue mixture would have generated a dreadful smell and would have been difficult to clean up. Although we did develop and print our own films occasionally, there would have been the same hazard if a film had dropped onto the heater.

Also, as we were at that time a family of two, drying pots by hand or on the draining board was not really a big deal - and it didn't use electricity! So we didn't use the Flatley for that. If we had been a larger family at the time, I suspect that the hassle of loading and unloading pots would have been equivalent to normal drying.

Heating rooms with the Flatley might have worked well as the heat would have been like that from a radiator - and central heating in homes was a rare luxury at the time. For us, though, at the time, room heating was a side benefit of airing clothes. We always used the Flatley with the lid off to hasten drying and to avoid overheating. The brochure shows vents in the lid which were absent from our more basic Flatley. Neither did our Flatley did have the protective mesh at the bottom or the 12 different heat levels advertised in the brochure.

Experiences of the features of the Flatley dryer

In the shivery coldness of a Scottish Winter, Mum used to put the Flatley on early in the morning and our vests, pants and socks, gloves and scarves, etc were put inside to heat up while my brother and I ate our porridge. Then, when we got dressed, it was with lovely warm clothes to go off to school.

This page brought back memories of school uniforms being warmed in the Flatley. Very cosy before going to school on a cold day.

The following image comes from a permanent sticker on the back of Gary Hunt's Flatley. It shows that the model SD.1. required AC/DC 230-250 volts, with power 1200 watts.

Essential information on the Flatley dryer from the back of the machine, courtesy of Gary Hunt

Made in the Republic of Ireland

The following Flatley adverts are courtesy of Camilla Wood who is A J Flatley's great granddaughter. She reports that the people her great grandfather used in his adverts were always family members. The 'mum' who wanted the Flatley was his wife, and the adverts also show her grandmother (his daughter) and her grandmother's sisters. There was also a commercial featuring Camilla's mother, but this was shortly before he died and was never shown.

It is almost certain that the later versions of Flatleys were adapted to be more in tune with safety require­ments, but the sort that we had would never have passed the health and safety regulations of today.

We had to be very careful indeed with how we draped clothes over the slats, because the mesh covering the heating wire was so widely spaced that anything small like a child's sock could have fallen through onto the heating wire. Even if it had just fallen onto the mesh it would have got overheated. Then there would have been a fire.

Fortunately we had no mishaps, but we never left the Flatley on while we out of the room.

My family had a Flatley when I was a child in the early 1960s. It didn't have any safety mesh at the bottom. Also if you inadvertently touched bare knees or elbows to the metal sides, it was an ouch and a flinch. In the end Mum draped a large towel over it, but there was something about ventilation that that could have been a problem.

The end for Flatleys manufacture ...

In spite of the safety issues, we were very pleased to have our Flatley. We used it regularly after our visits to the laundrette. We only got rid of it when we much later put central heating into a new house and could dry and air clothes over radiators. Other people probably fared the same or got rid of their Flatleys as they bought their own washing machines with tumble dryers.

The real reason Flatley went out of business

The reason for the demise of Flatleys was that its owner A J Flatley copied the Hoover single tub washing machine and started to market it. Hoover took action over infringement of patents which was very expensive for Flatley and ended in insolvency. I worked for him at the Long Mill, Pickford Street, Ancoats, Manchester in 1958 and found him a good employer. He provided a good daily meal for his employees and good bonuses for anyone willing to work hard. After Long Mill burned down, Flatley moved to Kearsley Mill near Farnworth, now a grade 2 listed building.

... But Flatleys have stood the test of time

My mother bought a Flatley dryer in 1959 and I am still using it 55 years later.

My mother, now 84, bought a Flatley in 1961 which is in almost daily use. It has never needed anything doing to it.

My Flatley is still going strong as I write in 2016. I wouldn't be without it.

A J Flatley, the man and the entrepreneur

Andrew Flatley was born in 1916 and died in 2005 aged 89. He was a serial entrepreneur. After the Flatley dryer, he made lots of different things, for example, a radio that looked like a toy train, grandfather clocks and all kinds of furniture, including those round and kidney bean shaped chipboard tables with table clothes over them.