How the weekly wash was dried before tumble dryers

With no tumble driers and no radiators, the weekly wash was dried outside by the sun and wind wherever possible, but bad weather meant that it was not always possible.

Drying the wash outdoors or indoors: the decision

When I was a child in the early 1900s, the rule of thumb seemed to be that if the pavements were dry and if there were no heavy clouds in the sky, out went the washing. This was so in freezing weather too. Otherwise the wash had to be dried indoors which was much less straightforward.

How the wash used to be dried outside

Clothes lines were simply lengths of thin rope, slung between hooks or brances of trees. When not in use, most women wound them into a coils and stored them somewhere dry. If they were left out, they got dirty and the dirt transferred to the clean washing. On washday, they were got out and placed in position for drying the wash. 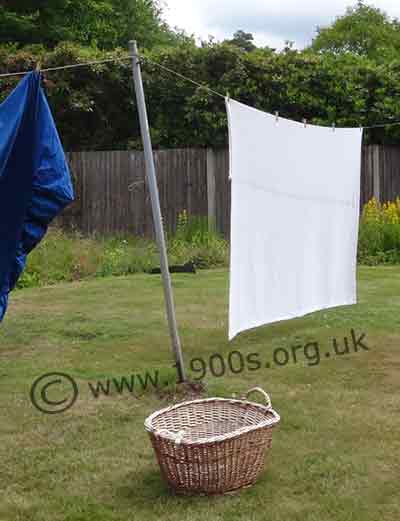 The clean, but wet washing was taken out into the garden in a basket, which of course was cane as there were no plastics. Then it was pegged onto the pepared clothes lines.

My mother and her next door neighbour would often find themselves in their gardens at the same time on Monday washday, and they would give one another cups of tea over the fence. I don't think there was time for much chatting. 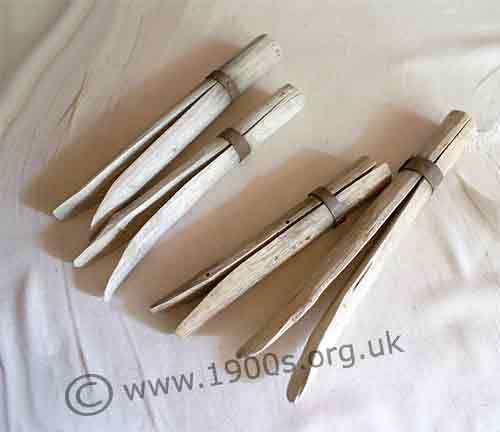 The pegs were normally kept in a drawstring bag known as a peg back. They were what were known as 'gypsy clothes pegs' because gypsies made them and came round knocking at front doors selling them.

Each peg was made from a single piece of wood, split lengthways and held together with a nailed-on strip of tin can.

How the washing was pegged

Each item of the wash had to be pegged in such a way that the wind would blow through it to blow out the creases. This was to make Tuesday's ironing easier.

The collars of shirts would be stretched taut over the line and pegged where the collar met the rest of the shirt, (the other way up from what is shown in the photo) and pillowcases would be pegged at the open end, loosely and on one side only so that they would billow out as the wind blew through them. Sheets were folded double and pegged at each end, with one side pegged taut along its whole length and the other side sagging slightly, fold downwards.

Once the clothes were pegged into position, the clothes line was propped up high in the air with a forked wooden prop to catch the wind. 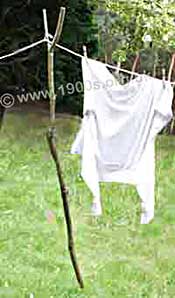 Clothes prop made from a sawn-off branch of a tree**

Specially made props could be bought. Such a prop was a length of wood between nine and twelve feet long and about an inch and a half square with a slot in the top to hold the rope.

Some women, though, tended to use a suitably sawn-off forked trunk or branch of a small tree, as shown in the photo, but these could be dirty to handle. They were most common in rural areas.

Taking the washing down

When the washing was reasonably dry, it was brought in, never left in a pile. Since the fabrics were natural ones, almost everything needed to be ironed. So, in preparation for ironing the next day, every item of the wash was neatly folded. If the wind had blown the sheets or tablecloths out of shape, I had to hold them while my mother tugged them back. With her greater strength, she would often pull them out of my hands. This made her very cross, and she would say, "Haven't you got any gumption?" I only learnt later much later that gumption meant energy and commitment. Yes, I did have gumption, but I was a few stones lighter than she was.

The whites were rolled up while they were slightly damp, ready for ironing the next day, and if they were too dry my mother would sprinkle them with water first.

The pegs were taken off the line and stored in the peg bag, the line was coiled and hung up in the yard and the clothes prop was lent against the house.

How the wash used to be dried indoors in bad weather

Even in uncertain weather my mother would always try to put the washing out of doors to dry if at all possible. Sometimes frost hung on all day, and the washing would come in stiff like boards. Her fingers would be white with cold. This was called hot ache and could be very painful.

When the rain, frost or snow came, the wet clothes had to be put in the kitchen to dry. There were a number of ways to do this.

It was common practice to hand what we could over the fireguard of the kitchen range. 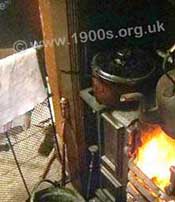 This fireguard was made of strong wire mesh with a half inch strip of metal round the top, and it could be secured to the wall. It well-and-truly guarded against fire. I never think that today's ones are adequate, but I suppose they are not supposed to be functional as few people have open fires.

The trouble with drying clothes over the fireguard was that, large as it was, its space was very limited. 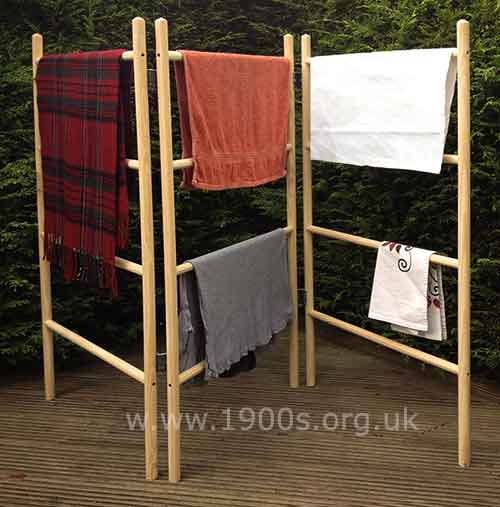 A particularly common method of drying was to hang the washing over what was known as a clothes horse. One is shown in the photo. These clothes horses were of course made of wood. They were useful but also couldn't hold much at a time.

Clothes lines strung across the kitchen

Clothes lines could be strung across the kitchen. They worked well but were depressing because they were so untidy and we had to keep dodging round them. 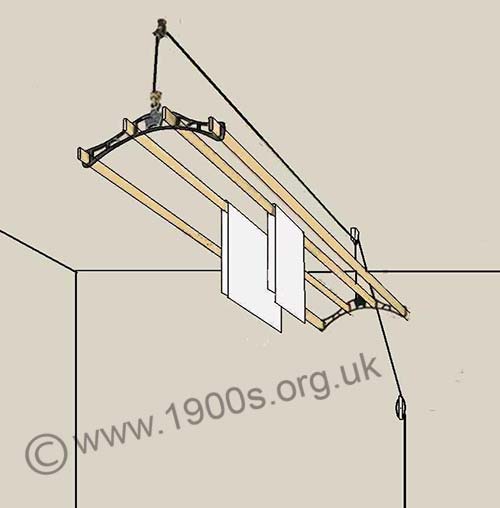 The most useful contraption consisted of rigid horizontal wooden bars over which the wash could be draped and which could be hauled up near the ceiling.

It could hold a good number of items and was out of the way. It was called a ceiling airer and is shown in the sketch.