The kitchen in a Victorian house

The meaning of the word 'kitchen' before the mid-20th century

The word 'kitchen' has changed its meaning over the years. In the early 1900s when I was a child on a working class Victorian housing estate, the scullery, not the kitchen, was where the food preparation, cooking and washing took place. In later life, I have talked to numerous people who lived all across the country and they all agree on this.

The first sketch on the house plans page shows how the ktchen and the scullery were connected.

Only as late as the 1940s were residents starting to refer to their kitchen as the 'living room'. The 'scullery' became the 'kitchen', and the little alcove there for washing, became the scullery.

What the kitchen was used for

The kitchen was where the family really lived, ate, worked and played. 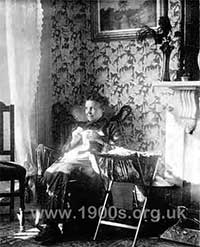 Typical decor of the kitchen, the everyday room in a working class household in the early 1900s*.

Note the patterned wallpaper, the picture on the wall, the fender, the long curtains and the high back chairs.

Being where the family spent its time, the kitchen was comfortably furnished.

The walls were different on different sides of the kitchen.

On the hall side, against the stairs, the wall made the side of the coal hole where the coalman shot the coal when he delivered, and it was quite attractive tongued and grooved wood.

The other walls were wallpaper on plaster. As can be seen from the photo, the fashion of the day was rather flowery, what might be descried today as 'busy'.

The floor was essentially wooden planks but it was covered with oilcloth, a waterproof and hard-wearing printed and varnished material. It was the floor covering in most of the rooms.

When it got worn, the varnish chipped off to show canvas threads underneath.

My mother washed her oilcloth with soapy water.

Oilcloth: what it was

Oilcloth was linen material coated with layers of boiled, oxidised linseed oil. It was thinner and cheaper than the alternative flooring which was called linoleum or just lino, but it was but otherwise similar. Both oilcloth and lino had similar woven canvas backings coated with linseed oil, bulked out with ground cork and other fillings. They have now been overtaken by vinyl floor covering.

A rug, known as a 'piece rug' or a 'rag rug', common in working class homes in the early 1900s and made by poking strips of hard-wearing fabric through canvas and backing with more canvas.

There was a large rug known as a 'piece rug' or a 'rag rug' in front of the itchen fire. It was made from off-cuts of hard wearing-fabric such as serge and tweed, of which there was no shortage as women always seemed to be busy mending or making something in those days. The fabric was cut into lengths and looped through canvas, then backed with more canvas.

Rag rugs were nice and warm to your feet and cosy.

Tool for making a rag rug. It was poked through the fabric backing, locked onto a length of rag and pulled back.

I dread to think how dirty they must have been. Like a good many more things, though, they were put outside onto the clothes line from time to time to be given a good blow. Also when there was snow on the ground, they were dragged quickly across it - not enough to get really wet but just enough for the snow to ease off the dirt. The sun, wind and snow did much for things in those days.

The back wall had a window which looked out onto the back yard and garden. There are four pages on these windows. The link gives the first of the four, from which the others are linked.

The window blind, like all the others at the back of the house, was linen with a deep fringe of lace made by my mother from macrame thread, crocheted. It was secured by a cord, hanging down from the centre. The knob to hold the cord was in the shape of an acorn and was called an acorn, although it was made in box wood.

There was a recess on either side of the fireplace. In one was a built-in cupboard and in the other was a dresser where the best dinner set was kept.

Jugs and cups were hung up on hooks on the shelves. In the lower part of the dresser were two drawers and below there was a small recess which was covered by a curtain. Boots and shoes were kept there.

In the drawers numerous odd things were kept. In one drawer were socks and stockings and in the other drawer were indoor games. Draughts was played on a draught board. We had two of these boards, one was made by my father from material like oilcloth and the other was a carpenter's joy and treated as such. I never knew what became of it. For us children the playing cards were mostly for playing Snap and Beat your neighbour out of doors, and of course Patience which has helped to pass away many an hour, both by children and adults.

Cribbage board, supplied by Denis Steele. It has a compartment underneath to store the pegs which are used for inserting into the board to show the progress of the scoring.

Denis reports that his recollection of his grandfather's much older crib board was of a larger and more ornate affair with a brasswork design on it.

Then there was cribbage, a card game where the scoring is kept with little coloured pegs on what was known as the 'crib board'. The pegs kept in a little compartment at the back of the board. My mother and father seemed to enjoy this game. I used to think it was an odd sort of game when I listened to them, scoring, "One for the knob, two for a flush", etc.

I did once join in a game of whist, not from choice, I might add. I could never remember whether my father had any trump cards and the odd remark would come from my father, "Bless me. (an expression of his) What did you do that for!?" My mother was a very good player and even won a number of small prizes at the Church Hall whist drive.

Another game that was kept in the drawer was Dominos. I didn't mind this as there was no skill, just luck.

The table and chairs

The kitchen table an early 20th century home would probably have been white, unvarnished wood.

There was a sofa, known as a couch, which was well used in more ways than one. I am pretty sure that my mother used to have ten minutes rest on it after we had gone to back to afternoon school.

This couch was particularly convenient, being in the warm kitchen, because if you had had to go up into a cold bedroom for a rest, you would think twice about it.

To us children the couch was something to play on, and a place to put things under as a quick tidy up before my mother came into the room.

There were numerous pictures on the walls but I only recall the water colours of lakes and mountains. They were hung from picture rails as illustrated on the parlour page.

The other important piece of furniture was my mother's sewing machine. Apparently she had had it since she was eighteen and it was in constant use, but never at evening times as it was one of the things that annoyed my father.

*The photo is courtesy of Don Billing and shows his grandmother, Alice Long in Islington, north London. She was probably living in an older, larger house than the terraced houses of the housing estates as I do not remember their ceilings being as high.