Making and mending clothes in the early 1900s

Women did a lot of sewing, mending and darning when I was a child it in the early 1900s. It was common, for example, to see boys with patched trousers and non-matching buttons. 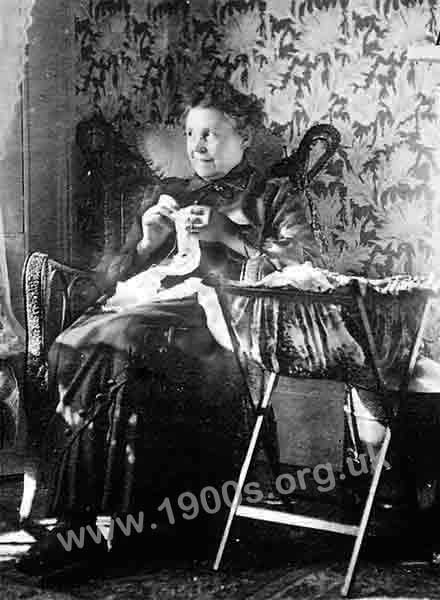 Sewing, dressmaking and mending at home at about the time of World War One. Note the sewing bag, the clothes and the padded wickerwork armchair. Photo courtesy of Don Billing showing his grandmother, Alice Long, born in 1855.

My mother would wash and unpick my father's trousers that were no further use to him and cut out a pair of trousers from the less worn parts to make a pair for one of my brothers. I had a winter coat which she made from a soldier's khaki coat that came her way. Other clothes that came her way originated from cast offs from the children in the big houses. These were given to servants who passed them on to us, but my mother invariably had to do some needlework on them to make them fit. She was very industrious.

Lynn Schoeffler's great aunt tells a typical story of receiving a hand-me-down wool coat that was faded and stained. Her mother, Lynn's great grandmother, removed the lining, picked the coat apart at the seams, turned every piece inside out, and then sewed it back together for a coat that looked new. 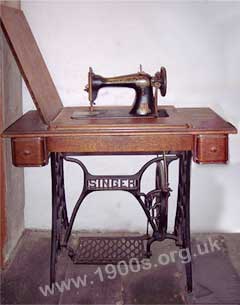 My mother, born 1881, told us that she had had her sewing machine since the was eighteen - which meant that it was a nineteenth century model - probably very similar to the one in the photo. We never asked how she came by it; it was probably a cast-off from somewhere. It worked by foot power via a foot treadle, and it was in constant use, apart from in the evenings as it was one of the things that annoyed my father. Then the working part of the sewing machine was lifted, a catch was released, and it was folded down and hidden underneath. Once the lid was lowered, the sewing machine made a table of sorts.

Every woman had a sewing box where she kept odd reels of cotton, pieces of wool, needles and anything else that had once been used for sewing and might be used again. There were many different styles, all invariably hand-made out of wood.

A significant part of mending was sewing on buttons. Buttons were essential for fastening as there were no zip fasteners and no velcro. Buttons fell off with wear, so women always kept a 'button box' in their sewing box, in which they collected odd buttons to use as replacements. It was normal to see working class children wearing clothes with odd buttons and no one thought anything of it.

Dressmaking scissors were scissors with long blades for cutting fabric cleanly. They were often taken to the knife grinder for keeping them sharp. Woe betide anyone who borrowed them for some other use. 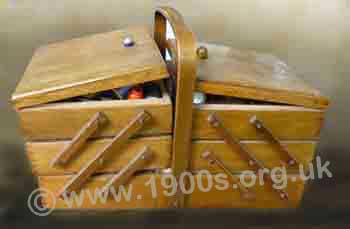 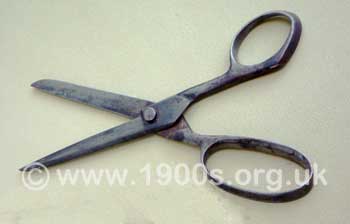 Dressmaking scissors, tarnished because there was no stainless steel

Tailor's dummy - for those who could afford one. A properly adjusted dummy saved ages of standing for being fitted.