Why Granny was an expert at darning

There was always a very great deal of darning needed in my mother and grandmother's time. This was because money was too short to buy much in the way of new clothes so holes in old clothes had to be repaired. There were many of them because they were mostly knitted or woven from pure wool which wore away rapidly.

Where most holes needed darning

Socks in particular needed regular mending when I was a child where they rubbed against the hard skin on people's feet. Often the soles and heals of socks were more darns than original sock.

Holes in knitted jerseys tended to be at the elbows from where people leant on tables.

However holes could be anywhere due to attacks from the clothes moth. 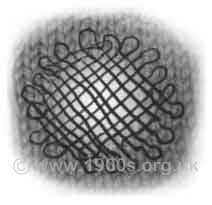 Loops left when darning to allow for shrinkage of the darning wool on washing and general easing into shape on wearing.

Around the edges of the hole, the sock or other garment was always thin and weak. So the darning had to be taken some way beyond the hole into the sound area. Otherwise it would quickly pull away in wear.

At that time, darning wool was not pre-shrunk. So it was crucial to remember that darns would shrink when washed which could produce a lump over the darned hole. So darning was not merely a matter of criss-crossing and inter-weaving the wool. Little loops had to be left at each end of the to-ing and fro-ing, as shown in the sketch.

Although modern yarns don't shrink, I always leave the small loops when darning. It means that there is some stretch in the darn so that it can be flattened or eased into the required shape.

After the next wash, when the darning wool had shrunk, the loops would be entirely gone. If the loops were omitted, the whole darn would shrink into a lump, puckering the sock around it, making the sock uncomfortable to wear and quickly damaging the rest of it.

So that the loops wouldn't show, the darn had to be done with the garment inside out. 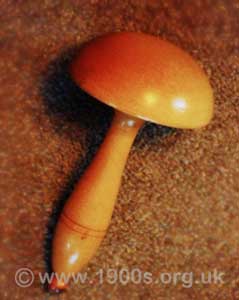 There was a special darning mushroom made of wood which was put inside the item to be darned, behind the hole to hold the darning area taut for working. Its 'stalk', with the rest of the sock around it, was held in one hand and the darning needle was worked with the other hand.

Wool for darning was sold in skeins which were much smaller than the skeins for knitting. It came in the typical dull colours needed for darning socks and was very fine, so that the darn wouldn't look or feel lumpy.

There were also cards with darning wool wound round them which were available in a much wider range of colours, suitable for darning other woollen garments.