Wool shops for knitting and sewing in the past

Knitting was common in the rationing and austerity of the 1940s and 50s, as was general sewing and mending. Scarves, gloves, pullovers, socks etc were all home-knitted with all women and girls seeming to be highly capable at knitting. So every town had a shop dedicated to selling wool, knitting patterns and knitting needles. Items for sewing and embroidery were sold there too, but the shops always seem to have been known as wool shops.

Knitting was almost always with wool before the early 1950s because there were no man-made fibres, and cotton and linen wasn't as elastic as wool. One of my friends was once very proud of her knitted white cotton summer cardigan because white cotton kept its colour whereas white wool went cream - but the cardigan lost its shape quickly, and she only wore it a few times.

The wool from the shop came in loose coils called skeins or hanks which were dyed in batches.

The skein of wool twisted into what was called a hank, with one end tucked inside the other, to prevent tangling in storage or transit.

To be sure that every skein used in a garment would match every other skein, it was important to buy all skeins for a garment together and to check that they all had the same batch number. Some women could not afford to buy all the skeins together, and the shop would reserve them for a specified length of time.

The wool came in three thicknesses - at least I only knew of three - called ply. 3-ply seemed to be the standard for most knitwear. 2-ply was for fine garments, although they could never match the fineness of the shop knitwear of today. 4-ply was for heavier garments such as scarves, hats and heavier clothes. I can't ever remember seeing really chunky wool and don't think that it existed.

Skeins from wool shops were not pre-shrunk in the 1940s and early 1950s - and wool certainly did shrink when it was washed. Woollen garments had to be washed very carefully and dried flat on a towel. Hours of knitted effort could be wasted in a few hours by poor washing.

Fortunately the wool that reaches the customer today has improved immeasurably from the wool of my childhood. One can reasonably expect it not to shrink.

Many of the items displayed are described in more detail in the pages on knitting patterns and needles, sewing and darning. 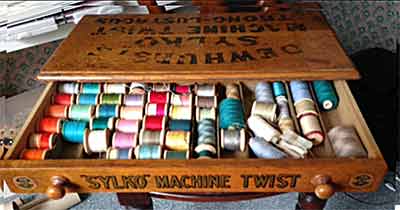 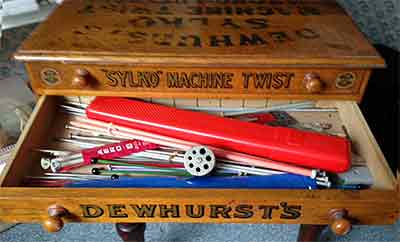 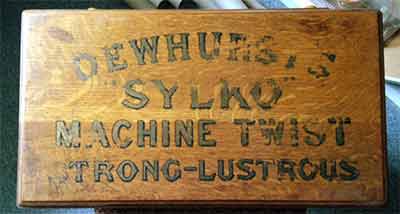 The display box in the photo

The display box in the pictures came from Lillian's Wool Shop next door to where I used to live and where I used to help out as a child in 1950s. The display box was wooden with two drawers and it advertised Sylko and Dewhurst's cottons on the lid. The drawers could be pulled out to show customers samples of the small sewing and knitting items that the shop sold, tucked away in various drawers behind or under the counter.

This box was one of two which were permanently on the counter top. I seem to remember that there was also a clock there facing the customer.

The wool itself was supplied by Paton Baldwin and, I think, Tootal Broadhurst And Lee.

All the wool was sold in balls not skeins. The skeins were pre-washed and accordingly pre-shrunk, then wound on a machine which no-one I have spoken to seems to remember seeing elsewhere. It was made of black cast iron which was of course very heavy. You put the skeins of wool onto two large pulleys and then threaded one end onto a spindle, through two arms. Then, whoever was available turned a wheel and lo and behold the skein wound into a ball. It was a wonderful gadget which no doubt was greatly appreciated by customers!

DO YOU, BY ANY CHANCE, HAVE A PHOTO OF SUCH A MACHINE?