Why shopping was a social activity in 1940s wartime Britain

Shopping was a social activity for home-bound women in England during the Second World War.

Why shopping was a social activity

More often than not, the women had to stand in queues because everything was so scarce, and as they could only buy what they could carry, they often went out shopping several times a day. To add to their number of shops, they carried their heavier purchases in cane / wickerwork baskets, which themselves were heavy even when empty.

Why join a queue?

Scarcity was such a problem that people would often join a queue not knowing what was being sold, just in case there was something useful to be had. It was pointless asking others in the queue because they didn't know either. 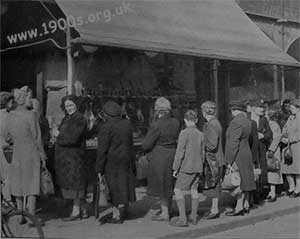 Life was a drudge, with few pleasures, as the facial expressions in the photos show. Stopping to talk provided some sort of relief and a valid excuse to put the baskets down for a while to rest arms. (There were a few baskets on wheels around, but they were not common. I asked my mother why she didn't use one, but she just gave her standard answer to questions she didn't like: "Because not".)

The shortage of men to interact with

To add to the women's tedium, they only had each other and their children to talk to.

All the men, apart from the elderly or disabled or those in reserved occupations - see insert - were away from home for the war effort; the young women were similarly occupied, and women all their children at school were required to fill the jobs vacated by the men.

So the social life of the women left at home consisted primarily of meeting one another while shopping. The people they met were other mothers of children of pre-school age, much older women and occasionally a few older men sitting smoking on a communal seat. So apart from the occasional outing to visit friends and relatives, no social activities were readily available for women with young children.

As shopping had to take place most days, the women bumped into one another frequently, and there must have developed what could have been a pleasant close-knit community. My mother's view was that it was a collection gossiping busy bodies.

Types of headscarf that women wore for shopping in London during World War Two. Note how stressed the women look.

As my mother was of a nervous disposition, she seldom wanted to stop to gossip, but it was expected. All the women did it. So I spent quite a lot of time just hanging around waiting, and of course watching and listening. The talk was always of shortages and of the menfolk who were away, often no-one knew where because that was secret.

'Pre-war' was a term that seemed to turn up in every conversation. It seemed to have an almost a mystical significance. If something was pre-war, then it was high quality, worthwhile or good in some other way.

The pattern of gossiping in the street continued well into the 1950s, even though the war had ended.