The only department store in Edgware was Stanley J Lee which was owned by the Lee family and, as far as I know, had no branches anywhere but Edgware. The people of Edgware seemed rather proud that their town boasted a department store. So it could not have been common.

Our local department store, Lees as it was called, was on two sites in Station Road: one sold haberdashery, fabrics, underwear, etc, which is the one in the photograph and the other, which is lower down the hill sold clothes.

There is another photograph of the upper shop on an Edgware page.

What I remember particularly about department stores and other large shops like Sainsburys was how the customers paid. The sales assistant sent each bill and the customer's money in a screw-top canister along a cable above our heads to a central till. Then the cashier sent back the change and receipt in the same way. I understand that the device was called a flying fox.

Every separate counter in the department store had its own flying fox which meant that there was a canopy of cables overhead.

The flying fox system meant quite a delay for the paying customer, but presumably the stores regarded it as safer from theft as only the cashier ever handled money. Cheques, incidentally were very rare. By no means all households had bank accounts, and shop keepers were loathe to accept cheques from people they didn't know, there being no way of checking whether they had the funds to cover the purchase. 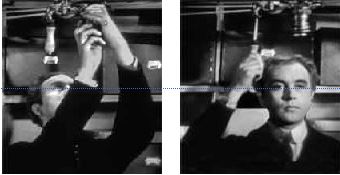 A sales assistant putting the customer's money into the flying fox canister and pulling a release mechanism to send it 'flying' along a cable to the cashier. Screen shot from an old film.