The High Street was - and still is - in the older part of Edgware. It was part of the old Roman Road of Watling Street. I didn't have much cause to go there, apart from when I was very young when my mother took me past it into Cannons Drive to the duck pond to feed the ducks and when she dragged me to the antique shop just behind the lamp post in the photograph. 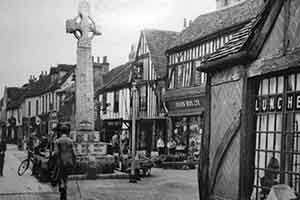 The building known as the Handel Smithy is on the right of the photo. The story goes that the composer Handel sheltered there from the rain when it was a smithy and was inspired by the sound of the hammer on the anvil to write The Harmonious Blacksmith. For more on this story - which is apparently only a story - see https://en.wikipedia.org/wiki/The_Harmonious_Blacksmith.

The man reputed to be the blacksmith is buried in St Lawrence Church, Edgware, with its beautiful and colourful Baroque interior which, when I was a child, took my breath away.

Behind the Handel Smithy is what was then Maureen Schiller's parents' dress factory.

The photo shows a Jenson Brothers shop, which looks as if it could be a florist.

My first school, Edgware Primary School was also in the High Street, but further along to the left, the far side of the cross-roads. 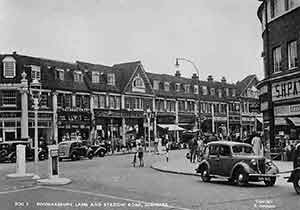 The Edgware shops about 1950 from Edgwarebury Lane looking south along Station Road towards the station - an original postcard which I bought in the 1950s. Earlier, in wartime, the road was much more empty and the only males to be seen were normally children or old men. 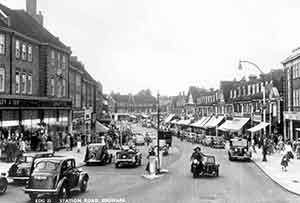 The Edgware shops about 1950 from Edgware station looking north along Station Road towards Edgwarebury Lane - an original postcard which I bought in the 1950s. In wartime the road was much more empty and the only males to be seen were normally only children or old men.

Apparently, although I never knew it while living in Edgware, there were tunnels under Station Road. They were only partially complete, and during the Second World War were used as Edgware station's air raid shelter. (I was too young ever to need an air-raid shelter in Edgware station because my family had our own Morrison shelter at home nearby.) Part of one of the tunnels was apparently used as a vault for Edgware's Abbey National branch which rented the space from London Transport.

The unfinished brick arches along the A41

Coming out of Edgware and turning left (west) onto the Bipass was a set of clearly unfinished brick-built arches in fields on the right. They were large and a distinctive feature. Thanks to Darren Kitson, I now know that they were linked to the proposed extension to the Northern Line Underground at Edgware - see below.

The arches as a children's play area

The proposed extension land ran behind Glendale Avenue, where we lived and went all the way to the Bypass where there were there were those tall structures. We called them the 'Norman Castles', and we would spend hours climbing up and down them. In fact the whole area became our extended playground. It was amazing that none of us was ever injured.

Once we met some men, possibly vagrants or imported workers, and when we mentioned to mother that we had been chatting to them she became very cross and told us to never talk with them again. We were somewhat surprised as we didn't think we had done anything wrong!


The extra platform at Edgware Station

As you came through the ticket barrier and towards the trains at Edgware Tube station, there was a flight of stairs straight ahead leading to two platforms and another flight of stairs on the right leading to a third platform. I have vague recollections that this platform was occasionally used in the 1940s, but certainly by the 1950s it never seemed to be, although the stairs down to it remained open. (I wonder if they are still there?) 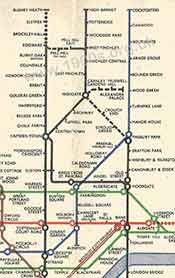 Section of the pocket book version of the 1946 London Underground map, issued by London Transport showing envisaged extensions to lines.

Scan courtesy of Darren Kitson. This is a detail of the 1946 map for the entire tube network

In Darren's 1946 tube map, the dotted and dashed lines show the envisaged extensions of the Northern Line, north and east from Edgware Station. Neither were actually completed because building work was interrupted by the outset of the Second World War in 1939. The northern extension was actually proposed many years previously and was intended eventually to go all the way to Watford.

The reason for the extra, unused platform at Edgware

As can be seen from the map, Edgware was set to become a junction station serving lines to Bushey Heath and to Mill Hill East. The extra and unused platform at Edgware Station was to service these lines.

(In fact Edgware came very close to having a choice of three tube routes into central London - but that is another story.)

The reason for the unfinished brick arches along the A41

The Edgware/­Brockley Hill/Elstree/­Bushey Heath extension was to be overground and partly carried on viaducts. The incomplete arches that could be seen along the Edgware Way were part of one such viaduct. Brockley Hill station was to have been perched upon it and was partially built.

The reasons for the tunnels under Edgware

Because Edgware station was a terminus and was to be a junction, underground space was needed for the Bushey extension. So tunnels were partially bored beneath Station Road and Rectory Lane, and they still remain (2014).

In fact, Rectory Lane would not have existed had it not been for the abortive tube extension. During the 1920s the area west of Station Road was essentially open land and access was needed by the contractors to construct the tunnels beneath Station Road. So an access road, or 'service road', was created using the, then, open land. It was this contractors' access which later became Rectory Lane.

Construction of the tunnels involved installing a concrete raft to support buildings on Station Road while the tunnels were bored beneath. However, for the same reasons as work on the rest of the Northern Line extension was stopped, these tunnels were never completed. They are still visible from the end of Edgware station's platforms 2 and 3.

Beyond Edgware station the tunnels turned somewhat towards the northwest and passed beneath what is currently (2014) Nando's on Station Road. Continuing beneath Rectory Lane the tunnels were to have emerged into a cutting. Some evidence of this remains on Rectory Lane in the form of a rather incongruous wall which was to be the parapet for the tunnel mouth, where the tracks would emerge from the tunnels into what would have been a cutting.

Plans for the extension after the war

London Transport had every intention of completing the Bushey Heath extension once the war was over, but more urgent matters meant the scheme was put on hold. Then came the so-called Green Belt legislation which put an end to the housing development beyond Brockley Hill which London Transport was hoping for in order to provide passengers for the new line.

Thus in 1950 the Bushey Heath extension was formally abandoned, and the railway land in Edgware was built on. Yet a possible extension from Edgware to Brockley Hill was never totally written off and that remains the case. However, should the extension be built, it would now have to be entirely underground and at a cost which would probably be impossible to justify. Edgware station is likely, therefore, to remain a terminus.

London Transport plate for display on the front of trains that would have terminated at Elstree. Plate in the possession of Darren Kitson.

The above London Transport map gives the name of one of the proposed stations as Elstree, but it is believed that the name displayed on the actual station was to be changed to Elstree South. Apparently this was to distinguish it from Elstree and Borehamwood station which was some distance away to the north.

Brockley Hill station was originally to be called Edgebury and surviving early plans show it as such.

Although the station at Mill Hill (The Hale) never saw a tube train, London Transport did issue tube tickets to it. Strange? No, not really. The tickets included use of a connecting bus service between Mill Hill East and Edgware.

On the website www.britainfromabove.org.uk two aerial images in particular, relate to the proposed Northern line extension from Edgware.

Aerial view EPW016513 is taken from the north-west in 1926 and shows Edgware Tube Station and some of the new buildings on the other side of Station Road opposite the Station Entrance. The concrete raft to support the building work in Station Road immediately above the proposed northwards extension tunnel section is clearly seen and also part of the access road, later Rectory Lane, behind these buildings.

A second aerial view EAW020694 taken from the south-west in 1948, shows the post war view of Edgware Tube station and roads and housing stretching northwards. To the upper right can be discerned the route of the A41/ Watford Bypass/ Edgware Way and a white streak along the proposed line route - presumably this white streak is the line of supports on each side of the Edgware Way for the proposed viaduct to carry the tube train route to the proposed Brockley Hill Station (about 500 yards east of the Canons Corner junction of Brockley Hill A5).

Then further onwards in a northerly direction to the site of the proposed Elstree South Station. Just to the right of centre and towards the top of the picture is a large complex of buildings situated at the bottom of Brockley Hill, which during the war was an important outstation for Bletchley Park, performing a large amount of Enigma key identification - the essential first step leading to successful decryption of an encrypted Enigma message - with reportedly in the region of 50 to 75 of the so-called Bombe machines. Its involvement in WW2 code breaking was to be secret until after the mid-1970s when information about Bletchley and its outstations was gradually published. It was known as the Stanmore Outstation and the area occupied just borders onto the Edgware area at Canons Corner, where its main entrance was situated.