An observer on the streets of the wider London area would see just two types of public transport: double decker buses and single decker buses. There might have been the occasional tram or trollrybus, but these were rapidly being phased out. 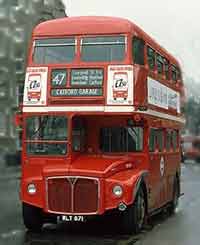 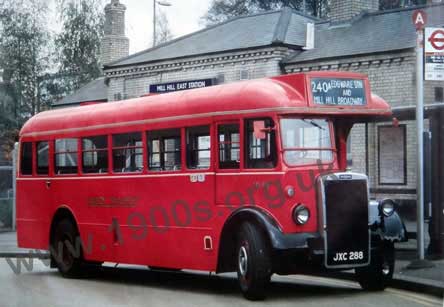 The single decker bus in the photo is the 240A that took me school in Mill Hill from my home in Edgware when the weather was too bad to cycle. The council provided me - and all school children - with a free bus pass because I lived more than 3 miles from the school. Detail from a photograph in London Bus Museum at Brooklands.

Under the stairs was a space for luggage and a lockable compartment for the bus staff. On one side of the entrance was a black box for used tickets. If you tap/click to enlarge the image, you will see it more clearly.

There were only single decker buses where the route required driving under a low bridge.

This page focuses on the double decker buses. 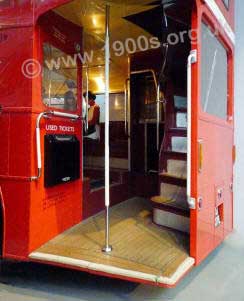 Double-decker bus entrance, showing the grab pole. Photographed at the London Transport Museum. (The no-entry sign placed by the museum has been digitally removed.)

The standard double decker buses had no doors, just an open platform with a vertical pole to hold onto while climbing aboard. This meant that passengers could get on and off buses while they were moving, which of course was recognised as unsafe. The trick for getting off a bus before it had quite stopped was to make sure that you were facing the direction of travel. Otherwise you would be knocked over backwards.

Double-decked buses having no closing doors and being unheated, were effectively open to the outside, letting in the cold and the fog - although they were an improvement from the buses with no roofs in my mother's childhood of the early 1900s.

In the very cold winters of 1947 and 1963, the condensation iced up the windows, and icicles grew from the ceilings. Some were 6-8 inches long.

I don't know whether any of the icicles ever broke off, but if so it would have been perilous for anyone sitting underneath. As it was, tall passengers had to duck as they moved to a seat.

I saw a lot of buses when I was growing up because the Edgware bus terminus was so close to where I lived. My first recollection was of the buses like the one in the photo with the 'eyes'. Every bus seemed to have these eyes. They were actually advertising a magazine, but, as a young child, I didn't realise this and thought that the buses were given eyes, just as my dolls and teddy bears were given eyes. After all, buses needed to see where they were going. I was quite concerned when new adverts eventually replaced the eyes.

Another advert that deserves a place here, although I hardly noticed it at the time, was the 'Make do and Mend' one which aimed to encourage everyone to cope in the rationing and shortages of the Second World War and the years of austerity afterwards. 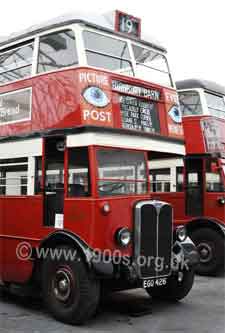 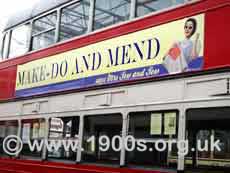 'Make do and mend' advert on the side of a bus. Photographed in London Bus Museum at Brooklands.